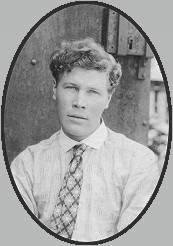 Letcher County has several hauntings. One of the most disturbing is the case of Floyd Frazier.

The Story of Floyd Frazier

Our haunted tale today is about the shadow man. It is a ghost that is both seen and heard at the Whitesburg Courthouse in Letcher County. This is also a legend that has come from a Letcher County murder case. Ellen Flanary’s Lady in White was the other ghost story to come out of this same case.

Who was Floyd Frazier?

Floyd was born in 1886. There is no birth date listed. He died on May 19, 1910. Floyd’s mother and several others would testify that Frazier had mental issues. That he may have been mentally handicapped. He also had rage problems and would lash out without warning. According to the papers, Frazier was a member of a prominent family in Letcher County.

There were rumors that Frazier had a crush on Flanary. That Frazier’s mother disapproved of the match. There were even rumors of jealousy and an order to kill the woman from his mother.

Ellen Flanary was a twenty-nine recent widow with five children. On May 10, 1907, she sent two of her children to town to run errands. The other three children she left in her home. She went out to pick greens for dinner that night. She never returned home.

The other members of the party insisted on checking. It did not take long to find the body of Ellen Flanary under a pile of rocks. Some of the rocks weighed as much as sixty-five pounds. This was to hide her body. There was other evidence at the scene of the crime. Including a knife and Ellen’s bonnet found a short distance from the scene.

The state of the body of Ellen Flanary as well as the ballad of Floyd Frazier in the memory of the murder that took place click here.

After Floyd’s confession at the scene, the police conducted a search of his home and person. Frazier had visible scratches on his person. Bloody clothing was in his home. According to newspapers, an attempt to scrub blood from a sleeve of one of his shirts. But other articles of clothing still had blood remaining on them. The police found a pair of shoes. The shoes had an unusual number of tacks in the heel. This was evidence that matched the footprints at the scene of the crime. He was then arrested and charged.

During the first trial held in January and February of 1908, a juror was held out for life imprisonment. Eleven jurors voted for the death penalty. This ended with a mistrial. The second trial would begin with the next term.

In May 1908, Frazier appeared in the Letcher Circuit Court. The second jury came back with a guilty verdict and recommended the death penalty. There were delays in the sentence. The scheduled date was July 3, 1908. His case went to the Kentucky Court of Appeals.

While awaiting the verdict, Frazier was in the county jail in Pineville, Kentucky. Frazier and seven other prisoners escaped from the jail in November 1908. Frazier had escaped to Bryson Mountain, Tennessee near Middlesboro, Kentucky. Sheriff Rice W. Johnson and Officer Lew Mays captured Frazier there. They returned Frazier to the jail.

There was a reversible error with the instructions to the court. The Kentucky Court of Appeals reversed the judgment. The judgment read that the trial judge did not give the jury instructions on self-defense. The case went back to Letcher County for retrial.

According to December 17, 1908, Mountain Eagle, Frazier was in Pineville, Kentucky. Sheriff Crawford was then dispatched to Pineville to return Frazier to Whitesburg.

A Perry County jury heard the case when it returned to the jury in April term 1909. The jury once again returned a guilty verdict. February 1910, the Kentucky Court of Appeals upheld the new ruling upon appeal.

In March 1910, Frazier makes a second attempt at escape. This escape attempt failed.

Petition to the Governor of Kentucky

The case was then sent before the Governor of the state of Kentucky. Governor Augustus E. Wilson stated in April 1910 that there was no reason that he should intervene. He felt that three juries had come to the same conclusion.

A week later there was an application submitted for the case to be commuted.  This was a plea of a life sentence from the death penalty. Governor Wilson ordered a stay of execution up to May 19, 1910. Or until the completed investigation.

Early in May 1910, jailer William Hall searched Frazier’s jail cell. This was due to Frazier’s two other escape attempts. Hall found a bottle of carbolic acid which can cause death. This led to many thinking that Frazier wanted to cheat the gallows.

After the investigation, Governor Wilson refused to interfere with the sentence. The decision came based on the grounds of the heinous nature of the crime. All legal means to save Frazier by his attorneys and friends ran their course. The stay of execution was then lifted.

The gallows stood on “school hill “in Whitesburg. At that time, it was the site of the Whitesburg elementary school. Frazier was the last person in Letcher County to face the gallows. Five thousand people were in attendance from all over Letcher County.

Hauntings Believed to be Floyd Frazier

When the Courthouse was being renovated, workers saw unusual things. Floyd’s shadow was on the second floor where the jail used to be. The local police have also reported seeing a shadow of a person outside of the building. Floyd’s shadow has appeared in the upper room windows of the courthouse at night.

People have reported seeing Frazier in other areas of Whitesburg. Many people believe that Floyd as well as others have been walking around College Hill. This is where the gallows used to stand. There is also the distinctive smell of woodsmoke in the area. The woodsmoke fills people’s apartments. Other things that happen are the pinching of people. Other people are being “helped” or pushed down their stairways. Some have reported their dishes moving out of the cabinets and crashing on the floor.

The City Hall of Whitesburg once stood as the Lewis Wholesale in 1912. It stands where the gallows had once been. Disembodied voices speak in the building. The sound of fire trucks starting their engines by themselves when no one is near them.

What are Shadow People?

This section is not to say that people have not seen these ghosts. Many creditable people throughout time have seen the shadow people. We are neutral on the subject as well as what they may be. We leave that to the judgment of our readers.

Shadow people are dark, human-like, shadows that appear out of the corner of your eye. They are often scary and unsettling. The feelings around them have ranged from an unsettled feeling to paralysis. They appear in many religions and folklores around the world. Some of the best known are the Jinn of ancient Middle East culture and the Nalusa Chito from the Choctaw Tribes.

Here are some common features of the Shadow people.

1. They are male in appearance

3. They seem to wear a large old-fashioned cloak or long coat.

5. They have depth to them. You know that they are not a shadow.

6. They have no eyes or glowing red eyes.

7. They do not speak

8. They can walk through walls and other objects

9. They can appear in other shapes such as a devil.

There is a huge debate about them. It is unclear if they are ghosts, demons, or aliens. But the main thing about them is they are observant. Which is unsettling.

We hope that you have enjoyed the second installment of our series of Haunted Letcher County. We thank you for continuing to support Kentucky Tennessee Living. As we bring to you the history of the Appalachian Mountains.

For More Information about Floyd Frazier and the Shadow People

Now’s your chance to meet the ghosts of Letcher County
October 19, 2016, The Mountain Eagle