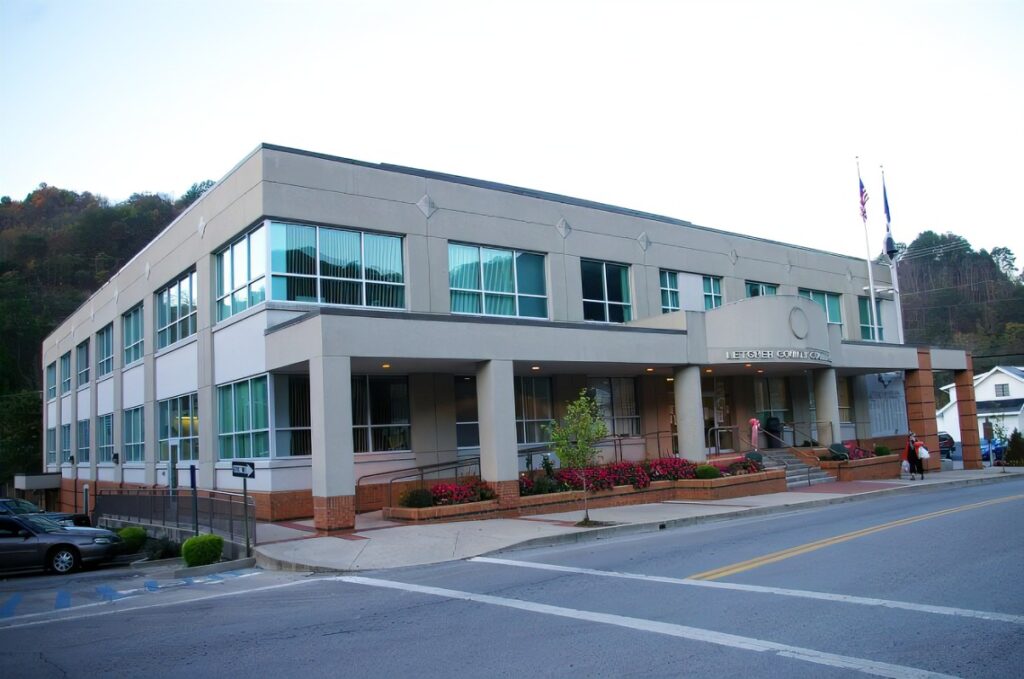 The History of the Letcher County Courthouse

In 1842, The residents petitioned the Kentucky State Legislature. The residents longed for a county of their own with a county seat and a courthouse.

Letcher County residents belonged to Perry, Pike, and Harlan Counties. So, in 1842, The residents petitioned the Kentucky State Legislature. The residents longed for a county of their own with a county seat and a courthouse.

In this petition, the residents asked for a petition to form a new County with a government. The General Assembly in January 1842 created the new county. This came out of the land from Harlan, Pike, and Perry Counties. The new county received its name from Governor Robert P. Letcher. Letcher was an acting Governor of the State of Kentucky from 1840 through 1844.

Later in years, Letcher County would annex land from Knott, Floyd, and Virginia. Letcher County would annex more land from Pike County. It now has 338 square miles of land and one square mile of water. Two major rivers would flow from the County. One side would be the Kentucky River and the other side would be the Big Sandy River.

Fight over the County Seat

The controversy over where the County Seat continued to boil. The first session of the court came to order on Mose Adams’s property. This property sat opposite the mouth of Pert Creek. Mose Adams built the house in 1812. The building would stand until 1928.

The first presiding judge was Nathaniel Collins. Collins was the son of James Collins who was an old settler. Collins was born in 1814 at Camp Branch and died in 1905 in the county. The first court session came to order in October 1843. Collins served ten years as the first judge.

Because of Hogg’s land donation, the County Seat was finally placed in Summit City. Summit City would change its name to Whitesburg. The name change was to honor Daugherty White, a legislator from Goose Creek in Clay County. He was instrumental in creating the new county.

The County selected five men to a commission. This was to establish boundaries for Letcher County. Four of the men were Nathaniel Collins, Hiram Hogg, Benjamin Adams, and Benjamin Webb.

The local officials took bids in 1843 for the construction of the courthouse. Ephraim Hammonds won the bid but, because of debt, he had to give up the contract. This happened before the building was complete. Rev. John A. Caudill in 1844 finished the building. The building lasted until 1897 when construction of a new one became proposed. Edward (Ned) Polly won the contract to build the jailhouse. Both the jail and the courthouse had log construction with plank trimming. During the Civil War in 1984, the jail burned down. A popular story says that a band of guerrillas set it ablaze. After the burning of the jail, Letcher County built a second jail. In 1907 the second jail needed replacing.

In 1898, the County commissioned a new Courthouse. An architect named Lewis (or Lemuel) R. Perry designed the second courthouse. By the middle of 1899, the Letcher County government began to occupy the building.

This courthouse featured a large cupola that sat above the courtroom. Inside the cupola was a bell. The bell called the jury into session. Fireplaces and stoves provided heat for the courthouse.

In 1907, completed construction on a stone jail across the street from the courthouse. The building was the third jail in Letcher County. It was later remodeled in 1923.

With the addition annexed on the backside of the Courthouse in 1936-1937 by the WPA. The WPA is a federal agency called the Works Progress Administration. The new edition featured a furnace that heated both parts of the building. This addition would also feature more rooms for office spaces.

In September 1948, The Letcher-Perry Circuit Court began its first session. Circuit Judge Sam Ward of Hazard was its first judge. This was part of the re-districting of several Kentucky Counties.

In January of 1950, Inspections of the Courthouse and jail found it to be in horrible condition. The Letcher County Grand Jury submitted a report. Letcher Circuit Judge Sam War accepted the report.

By the 1960s, the cupola was no longer attached to the building. The jail needed major repair. Escapes happened quite a bit. The prisoners would push the bars apart. Then they would lower themselves to freedom using their sheets.

In September of 1988, Judge/Executive Ruben Watts petitioned for grant money. The money would go to repair and remodel the courthouse. Estimated costs would be between two million and three million dollars. The estimate came from Bill Richardson a Whitesburg architect.

In June 1996, County Judge/Executive Carroll gave a report. It stated that the planned renovations were running $500,000 over the budgeted amount. The estimated cost would reach five million dollars due to the new wage scale. The new wage scale went into effect in July 1996.

In December 1997, while reconstruction was underway, the workers found a time capsule. The workers found the capsule in the courthouse cornerstone that was from the year 1964. In this time capsule was two copies of the Mountain Eagle. Also, it contained a Kennedy half a dollar, a calendar, and a picture of the courthouse. It also held a book containing the Declaration of Independence. A sample election ballot was also found. The ballot featured the race between President Johnson and Sen. Barry Goldwater.

A memorial to World War I, II, and Korea is part of the front of the Courthouse. With the names of all the men who died during those wars. A statue of a soldier stands in honor of those men.
For more information about the Jail and Courthouse History of Letcher County

A Special Thank You

We wish to extend a thank you to Eileen Williams Sanders and Laynett Halcomb Collier and the Mountain Eagle for the information found in the video.

For more information about the Letcher County Courthouses: