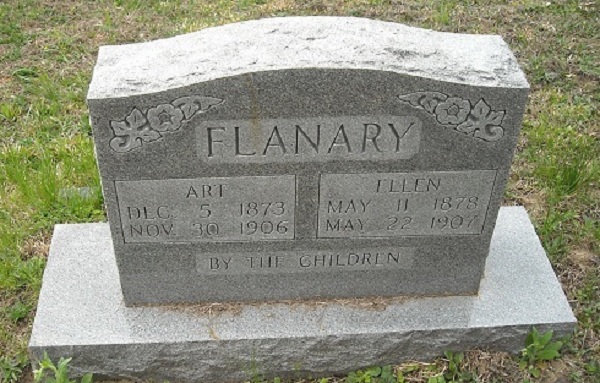 Ellen Flanary is Letcher County's most famous haunted tale. Behind every ghost is a story.

Today we are starting our Haunted Letcher County History series with the Woman in White.  For the next couple of months, we will be showcasing the ghost stories and legends of Letcher County, Kentucky.  We hope that you enjoy our new series.

Who was Ellen Flanary?

Ellen Mullins was born on May 11, 1878, in Wise, Virginia. Ellen was the daughter of George Washington Mullins and Malinda Hubbard Mullins. She married Arthur H. Flanary in the year 1897. Arthur was born on December 5, 1873.

At 29 years old she was a recent widow to Arthur H. Flanary. Mr. Flanary had passed away at the age of thirty-two on November 10, 1906. Ellen’s children were Nannie B., Robert C., George W., John, and Flora Jane. They were between the ages of 3 and 13 years old. Along with her five children, Ellen lived at the head of Pert Creek where Pine Mountain joins the hollow.

On May 21, 1907, after breakfast, Ellen sent her two eldest children to town to run some errands. She left her three younger children in the house. She then went out to her garden to pick some greens for supper. When the children returned home, they could not find their mother.

All alone, the children spent the night by themselves. Ellen never came home to her children that night.  The next morning, after learning Ellen was missing, they formed a search party.

How Ellen Was Found

Several of the neighbors were in the search party including Floyd Frazier.  Frazier attempted to misdirect the party from the creek area.   This would later prove his undoing in the case.

The next paragraph describes Ellen’s body and the graphic nature in which it was found. This information came from both court records and newspaper articles of that time. Viewer beware because it is graphic.

The search party found Ellen by a nearby creek. Large stones covered her. Some of the stones weighed as much as sixty-five pounds. This was a clear attempt to hide her body. They found her skirt torn off and placed under her. According to newspaper sources and the court reporter’s documents, this is the description of Ellen’s body.   She had several bruises on her body and head.  She had been sexually assaulted, possibly raped.   She had a stab wound to her breast, and a gash across her throat.

Nearby were she lay; was the greens she had been picking that day. The party found a bloody handprint on a nearby fence. Large footprints were in the mud that had an unusual number of tacks in the heel. Following the tracks, they found a knife. Continuing the footprints, the party found Ellen’s bonnet under another pile of rocks.

Her family buried Ellen next to her husband Arthur. They are together at Sergent & Blair Cemetery in Whitesburg, Kentucky.

The Ballad of Floyd Frazier and Ellen Flanary

When tragic circumstances happen in the mountains, songs and ballads become part of our history.  It is a way that we remember what happened during the time.   In this case, there was a song that everyone used to sing about it.

The song is called “Floyd Frazier” and it can be found on this page https://mudcat.org/@displaysong.cfm?SongID=2060&SongID=2060.

The Ghost of Ellen Flanary

Many witnesses have testified that they have seen Ellen’s spirit. It can be seen walking in the head of Pert Creek trying to get home to her children. She is often described as a lady dressed all in white. Many drivers along this road have seen her crossing the road on Pine Mountain. For those that are in Letcher County, the place in question is the horseshoe curve on Pine Mountain Road.

One can hear the crunch of gravel and other odd noises near where the party found her body.

This next section is not to say that these people have not heard or seen anything. This is to explain that “Woman in White” is not a new ghost story. And one of the greatest legends that linger in the Appalachian Mountains to this day.   While the “Woman in White” has been seen in many areas around the world.   There are enough creditable people who have claimed to see her not to think that there is something out there.   Here is some of the history of the legend that is found around the world.

One of the most popular stories of legend is the “Lady in White”. Many cultures throughout history have had her. Either she is weeping or searching for her way home. Many think she is a harbinger of death when seen. This is how the myth usually goes.

The ghost or apparition is always a female dressed in all white. She is often seen in rural areas. She is always associated with tragedy. Either murder, betrayal of her loved one, or the taking of her own life. In some legends, she has children and sometimes they die with her. In those cases, she is always looking for her children or wanting to return to them.

One of the more popular “White Lady” or “Woman in White” is a hitchhiker. She never pays her fare or will disappear before the destination. The United Kingdom, United States, Brazil, and Slavic countries all have her.

In North and South America, among the Hispanic cultures, she is the “Weeping Woman.” She is often a lady who has killed her children to be with the man she loves.  She is always seen in great despair and weeping for her lost children.

The man who was convicted of the murder of Ms. Flanary was Floyd Frazier.  He confessed to the crime.  And he faced a trial by jury. He went to the gallows, the only man to do so legally in Letcher County, Kentucky. The story of Floyd Frazier and his ghost will be next week.

We hope that you have enjoyed the first part of our series of Haunted Letcher County.  We thank you for continuing to support Kentucky Tennessee Living.  As we bring to you the history of the Appalachian Mountains.

This video also hit the Kentucky Digital News website check it out by clicking here.

Now’s your chance to meet the ghosts of Letcher County
October 19, 2016, The Mountain Eagle

GOES TO THE SCAFFOLD
May 26 1910 The Mountain Eagle

Floyd Frazier, or
The Murder of Ellen Flannery
http://traildriver.com