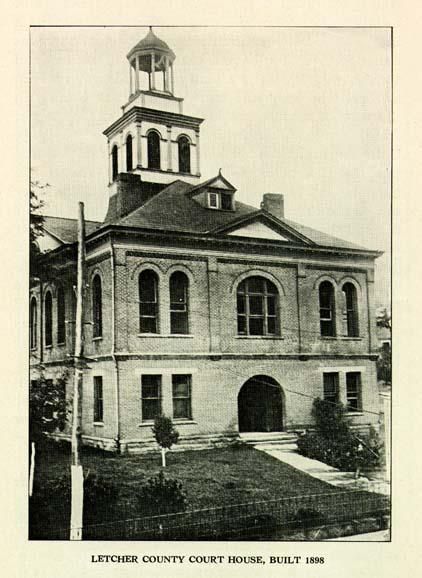 In 1842, the residents of the area petitioned the Kentucky State Legislature and Governor Robert P. Letcher. This is Letcher County's story.

Surveyors from Knox and Clay counties went to the area to mark off where the new county lines would be. The Legislature also appointed a commissioner. Their salary was two dollars a day for their efforts. The assistants’ salary was one dollar a day. The county levy paid the appointees.

Governor Letcher appointed Nathaniel Collins, Hiram Hogg, and Benjamin Adams. These men were to help lay out the land of the new county. Collins would become the first presiding judge of Letcher County at a later date. Hiram Hogg would donate land for the first Letcher County Courthouse.

The Commissioner and Surveyors had finished their tasks. They reported to the Kentucky State Legislature. The General Assembly took the report in January 1842 to create the new county. Approval for the Act came on March 3, 1842, by the General Assembly of the Commonwealth of Kentucky. The Act for the new county would take effect on April 1, 1842. This came out of the land from Harlan and Perry Counties. The new county received its name from Governor Robert P. Letcher. Letcher was an acting Governor of the State of Kentucky from 1840 through 1844. The original boundaries:

“Be it enacted by the General Assembly of the Commonwealth of Kentucky, That from and after the passage of this act, Letcher County shall be known by the following boundary:

In 1885, Letcher County would both annex and give the land. Beefhide and Elkhorn sections of land came from Pike County. Carrs Fork and a section of land where Hindman is now located went to the formed Knott County.
Letcher County now has 338 square miles of land and one square mile of water. Two major rivers would flow from the County. One side would be the Kentucky River and the other side would be the Big Sandy River.

There was a bit of a kerfuffle when it came to choosing a site for the County Seat of Letcher County. There was a five-way town split about who would win the seat. Colson, May king, Indian Bottom, Er-mine, and Summit City were contenders. At the time, these areas had the biggest populations in the area. This was long before Consolidation Coal Company would build McRoberts and Jenkins.

Each place felt that it was the best spot and offered the best area for the new courthouse and county traffic. Yet, Hiram Hogg would donate ten acres of land. Hogg was a businessman who owned most of the businesses in Summit City.

The County selected five men for a commission. This was to establish boundaries and establish a county seat for Letcher County. Four of the men were Nathaniel Collins, Hiram Hogg, Benjamin Adams, and Benjamin Webb.

The officials who were setting up the county accepted the offer. And the new county seat would be in Summit City. Division of the land into a courthouse, jail, county buildings, and so forth. Private residents bought the remaining land.

In 1842, the name of Summit City would change to Whitesburgh. This was in honor of John D. White. a legislator from Goose Creek in Clay County. White’s efforts were instrumental in creating Letcher County.

On February 10, 1843, Whitesburgh would become the official county seat. The name changed its spelling to Whitesburg on January 7, 1892. From November 8, 1865, through June 12, 1866, everything closed. This might have been because of the Civil War battles that were going on at that time.

We do cover the changes to the courthouse over the years in another article. The first courthouse in Letcher County set across from Pert Creek in Mose Adams’s house. Mose Adams built the house in 1812. The building would stand until 1928.

The first presiding judge was Nathaniel Collins. Collins was the son of James Collins who was an old settler. Collins was born in 1814 at Camp Branch and died in 1905 in the county. The first court session came to order in October 1843. Collins served ten years as the first judge.

The First Men to Hold Office in Letcher County

Both the jail and the courthouse had log construction with plank trimming. There would be a new judge, jailer, and other officials.

Thank you for reading our article The Establishment of Letcher County. We thank you for continuing to support Kentucky Tennessee Living. As we bring to you the history of the Appalachian Mountains.