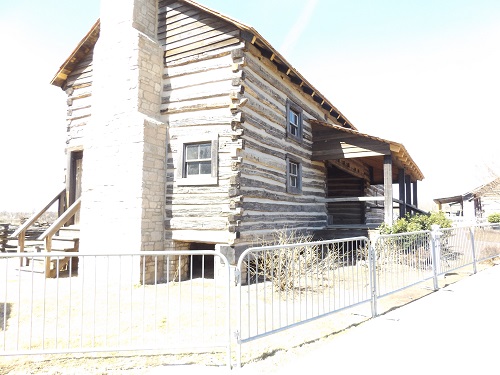 Donated by Tom Wade of Kenton, Tennessee to the Discovery Park of America in 2012, Wade Cabin is sure to delight with its surprises.

David Crockett was a huge figure that lived in the area of Central and West Tennessee. As part of his birthday celebrations, several people donated old cabins and other buildings to form Heritage Park “Settlement” on a 50-acre plot of land. The buildings that were donated resemble the structures that would have existed at the time that Davey Crockett was a frontiersman in the area.

We are now starting a portion of our site where we will explore buildings and places of the people in Kentucky and Tennessee who have worked very carefully to preserve the time before cities and traffic. Once a week we will get aboard Mr. Peabody’s way-back machine and transport ourselves back in time to see how the pioneers of this region lived their lives. The first section of our stop will be at the Discovery Park of America in Union City, Tennessee.

Nestled in the Western part of Tennessee is a little park out in the middle of nowhere that holds a lot of surprises. One such surprise is the Heritage Park. The first building that you encounter is the Wade Cabin. The cabin was donated by Tom Wade of Kenton, Tennessee to the Discovery Park of America in 2012.

The cabin is a two story building with a dogtrot porch between the two separate structures that are combined as one. A dogtrot was a common addition to many cabins in the South to act as a breezeway during the hot summer months as a place to sit and cool down from the heat of the hot Southern Summer days.

Purpose of the Wade Cabin

When the cabin is open to the public several craftsmen and women can be seen showing their pioneer skills. The craftspeople can be seen making such goods as: candles, soaps, brooms, dying yarns from plants grown inside of the park, basket weaving, chair and furniture making, and woven goods. Each crafts-person will tell you of the history behind each of the skills and how they were accomplished.

Restoration of the Wade Cabin

The cabin is under a current restoration process. It was built from reclaimed logs that have started to age with time. This process has caused visitor safety concerns as well as the building itself has started to deteriorate in current location. However, even though it is roped off from visitors entering into the building, you can still look at the large double cabin and get a sense of what life was like for the people in that time. It is hopeful that the Wade Cabin will once again be open to the public for viewing in the near future once the restoration is complete.

The restoration is funded by the Robert E. and Jenny D. Kirkland Foundation and will cost more than $500,000 dollars when it is completed. While the majority of the work has now been completed, there are a few cabins that are still under the restoration process and should be completed soon.

There are quite a few cabins and a small town that we will further explore on our way through the Heritage Park over the next several weeks. We hope that you enjoy this walk through our history.