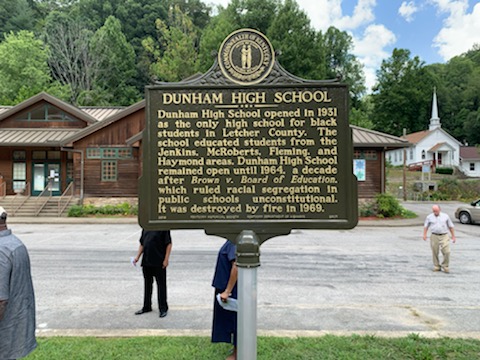 The history of Dunham High School is being rediscovered by a new generation of people. May it never be lost to the sands of time.

Here at Kentucky Tennessee Living we do not shy away from controversial portions of our history. However, we have always and will always take a neutral stand when posting our history for the benefit for future generations. Because of the sensitivities of today’s culture, we will make this statement about Dunham High School and the other schools in Letcher County. This was done during the time of the Jim Crow and the “Separate But Equal” laws.

We are covering the African American Schools at that time called “colored schools” of the time because unfortunately they were separated. New laws came into place that changed this forever, and it was a good thing. With this understanding the people and the place should be remembered for their contributions to Jenkins and Letcher County as a whole.

This topic is not up for political debate, but only stands in remembering a time that no longer exists. For those who forget their history are surely doomed to repeat it.

According to the Mountain Advocate, the first graded school was in Whitesburg, Kentucky and held its first graduation commencement on March 23 and March 24 in 1911. J. Neil Burnside was one of the few African American Superintendents in the state of Kentucky at that time. The school teachers were Miss S.P. Lewis of Fairfield and Ellen B. Adams of Barbourville, Kentucky.

Because of the influx of black coal miners working for Consolidation Coal Company schools needed to be established for their children to get an education. There was an agreement between Consolidation Coal Company and the Letcher County School Board that all money collected from taxes and money paid to the school treasury would be used to maintain and upkeep of the schools for the education black students of the county.

The first schools in the Jenkins Independent School System was established on April 26, 1915. The school had one teacher and fifty-eight students. There would be three schools established for the students in Jenkins, Dunham, and Burdine. The schools that were established at this time were only grade schools. It would not be until 1931 that there would be a high school established. The schools would continually grow with the numbers reaching a peak of 528 students by the 1928-29 academic school year for Letcher County as a whole.

In 1931, the City of Jenkins, Kentucky and the Letcher County School Board would come to an agreement and establish the Dunham High School. This school would serve grades 1-12. As part of the agreement, Letcher County contracted with Jenkins to make sure that the students received an education throughout the county. Students from Jenkins, McRoberts, Fleming, and Haymond would all attend the Dunham High School. The first ninth grade class would enroll in this year. The class would graduate in the 1934-35 academic year.

By the 1936-37 academic year more elementary schools would be established for the surrounding communities of Haymond, Carbon Glow, Fleming, and Tom Biggs in McRoberts, Kentucky. The elementary schools in Burdine and Jenkins would close. During this time period, sadly, Dunham High School would be the only high school available in Letcher County for its African American students for many years.

In 1938, the Jenkins Independent School Board voted to request the addition of four new school rooms to the Dunham High School by the Consolidation Coal Company. This was accepted and four rooms were added to the Dunham High School Campus. Unfortunately this was the only high school that the black students were allowed to attend until laws changed.

Brown Versus the Board of Education

On December 7-9, 1953, Oliver Brown versus the Topeka, Kansas Board of Education was decided. This lawsuit is famously called the “Brown versus the Board of Education”. The Supreme Court struck down the laws of “Separate but Equal” that were on the books. There were actually five cases total that culminated in the striking down of the laws that kept everyone separated from each other. The other lawsuits involved were combined into a single case and brought before the Supreme Court.

The End of Jim Crow

Although the idea of separate but equal looked good on paper it was not so in practice. Many of the facilities were consistently inferior, underfunded or just nonexistent. These set of laws institutionalized the second class citizenship of most African Americans in the USA.

These laws were defeated by other Supreme Court rulings such as Heart of Atlanta Motel, Inc. versus the United States in 1964. The remaining Jim Crows fell when the Civil Rights Act of 1964 and the Voting Rights Act of 1965 was passed.

The first school that became integrated was the St. George Catholic School in Jenkins Kentucky in the academic year of 1963-64. The first class of the integrated Jenkins High School would be 1964-65. This would not be an easy transition for the students into the new school system. However, they broke ground for future generations of students in the city of Jenkins.

Not An Easy Transition

There were many in Letcher County that were not ready for the changes that needed to be made. After integration, there was trouble for several years. Unfortunately the attitudes did not change with the court rulings. Fortunately, they have been changing over the years but it has been one person at a time.

But to quote the great Martin Luther King Jr.

The City of Jenkins has put up the Historical marker #2607 to commemorate the Dunham High School. The marker was dedicated on August 28, 2021. The location of the marker is in front of the Jenkins Public Library in Jenkins, Kentucky.

Dunham High School opened in 1931
as the only high school for black
students in Letcher County. The
school educated students from the
Jenkins, McRoberts, Fleming, and
Haymond areas. Dunham High School
remained open until 1964, a decade
after Brown v. Board of Education,
which ruled racial segregation in
public schools unconstitutional.
It was destroyed by fire in 1969.

We would like to thank Carolyn Rodgers in all of her tireless work finding the history of Dunham High School. Thank you for not letting this history fall to the sands of time and be lost forever.

We also want to thank Eileen Williams Sanders for all of her tireless work and staying up with me one night to find out more information about the schools of Jenkins and a time that should never be forgotten in our history books.

And a huge thank you to my best friend Beverly Thompson Etter. Thank you for letting me bend your ear when I was struggling on how to best handle this difficult part of our history. I love you always. You are always my rock and inspiration but most of all, you are my very best friend.

We would like to dedicate this story to Lois Thompson and her fellow classmates of Jenkins Class of 1964-65. While we are sure that there was a lot of things that went on that should not have, your class broke barriers and plowed ground for all of us that followed after your footsteps. Thank you for being the Blue Devils and continuing to show all of us how to be truly Cavaliers as we walk together in our journey into the future hand in hand.

1954: Brown v. Board of Education
https://www.nps.gov/articles/brown-v-board-of-education.htm