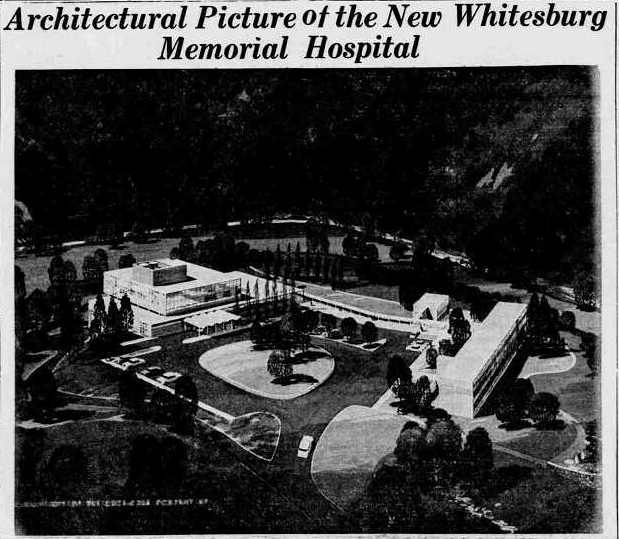 The Whitesburg Memorial Hospital 1953 Through the Present

The plans for the new hospitals were published in the newspapers in 1953. This major task would be under the direction of Doctor Warren F. Draper, who was the Executive Medical Officer of the Fund. The hospitals would be dedicated by Mr. Lewis at Beckley, West Virginia on June 2, 1953. The hospitals would open their doors to patients in 1956.

The hospitals would be built with the help of loans from the United Mine Workers Welfare and Retirement Fund. The miners would be the primary beneficiaries, however, they would also be open to all of the people in the area. Only in the cases of emergency where there would be bed shortages would this policy change and the miners would be given first priority.

Saturday, November 7, 1953, at 10:00 a.m., six hundred people came to watch the ground breaking ceremony of the Whitesburg Memorial Hospital. It was the last of a chain of ten hospitals that were being built in the region by the United Mine Workers of America.

The breaking of the ground was preformed by Judge Robert B. Collins. The Whitesburg Memorial hospital would open with an estimated 92-bed capacity and would be ready for operations in 18 months from its ground-breaking ceremony.

According to the Mountain Eagle, Senator J.E. Johnson, who was a Pike County physician went to the Kentucky State Legislature because of problems with the medical care that many people were receiving. Under this new bill, a patient would be given the right to select their own physician and could not be denied that right.

The President of the UMW, District 30, Sam Caddy, said that new bill would put the hospitals out of business.

By the 1960s, the Miners Memorial Hospitals would close some of their hospitals. A new independent not-for-profit organization headed by the Board of National Missions would purchase and rename the remaining hospitals Appalachian Regional Hospitals (ARH). To reflect its far-ranging services that they now provided, ARH, new health system would rename themselves to the Appalachian Regional Healthcare (ARH) in 1986.

The Appalachian Regional Healthcare system has expanded their hospitals to include the cities of Barbourville, Hazard, Harlan, Hyden, Martin, McDowell, Middlesboro, Paintsville, Prestonsburg, South Williamson, West Liberty and Whitesburg in Kentucky; as well as Beckley and Hinton in West Virginia. As well as investing in new technology and medical capabilities, they continue to expand to build and acquire new facilities to help the communities with their growing health care needs.

Thank you for watching our video about “The Whitesburg Memorial Hospital 1953 Through the Present”. We thank you for continuing to support Kentucky Tennessee Living. As we bring to you the history of the Appalachian Mountains.

The Way We Were
Mountain Eagle
Thursday, February 27, 1958