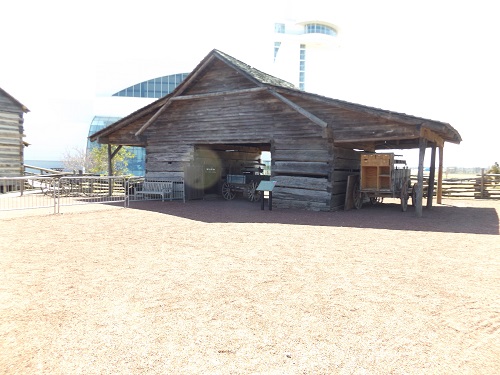 Nestled in the Western part of Tennessee is a little park out in the middle of nowhere that holds a lot of surprises. One such surprise is the Heritage Park.

Once again we are hopping on board Mr. Peabody’s way-back machine and transporting ourselves back in time to see how the pioneers of this region lived their lives. So don your Sunday best as we travel back to a time when the Pioneers lived and we sit a spell and take in the history that was left as our legacy.

David Crockett was a huge figure that lived in the area of Central and West Tennessee. As part of his birthday celebrations, several people donated old cabins and other buildings to form Heritage Park “Settlement” on a 50-acre plot of land. The buildings that were donated resemble the structures that would have existed at the time that Davey Crockett was a frontiersman in the area.

Behind the Wade Cabin is the Bumpass Livestock Barn and Corn Crib. The Barn was donated by the Barnes Family and was moved to its new location in 2012. The barn was built in 1858 by William Bumpass and his son, John. It was originally built by using Popular trees that was found on their property and used to house two mule teams.

There are two buggies that are in a little carports to the each of the sides of the barn but there is no signage as to what the buggies were used for or when they were donated and who by.

The corn crib inside of the barn was added later in the 19th century to the Livestock Barn to help store the animal feed. Other animals and livestock were added to the barn at this point in history so they needed to store their food close by. There are currently no animals housed in this barn at this time.

The Atwill Corn Crib that is a separate building on the Discovery Park of America’s property was donated by Mr. J. L. Atwill and moved to its current location from Fulton, Kentucky in 2012. This building was well ventilated to help dry and preserve the corn. The elevated storage floor helped to deter rats and other corn eating rodents.

Restoration of the Buildings at Heritage Park

While there are several buildings with gates around them to indicate that they are still under the restoration process. You area still able to access many of the cabins and see what the life was like back in the 1800s. Many of the buildings’ restoration process has been completed. But there are several places such as the barn and the Wade Cabin that is still under reconstruction and you can watch the workers as they complete this task.

The restoration is funded by the Robert E. and Jenny D. Kirkland Foundation and will cost more than $500,000 dollars when it is completed.

There are quite a few cabins and a small town that we will further explore on our way through the Heritage Park over the next several weeks. We hope that you enjoy this walk through our history.