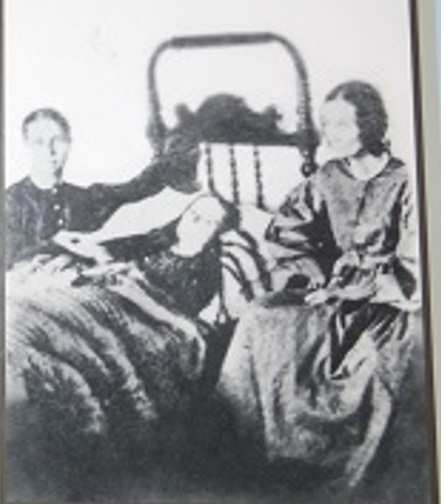 Susan Godsey's condition remains a mystery to this day. Was it an illness or a dose of deadly medication?

Susan Carolyn Godsey was born healthy sometime in 1836 in Gibson County near Trenton, Tennessee. Her parents were Clinton Lacy Godsey and Julia Angel Godsey. Susan Godsey had one sister named Mary Godsey Journey. When she was seven years old the family moved to Obion County.

One year later, Susan got the chills. The usual medications were prescribed and they would work for a short time and then the symptoms would reappear.

When Susan turned ten years old, she went to visit her sister, Mrs. Journey, and while with her got a chill. Dr. Wasson was called and prescribed the medications of delphinium and sulfuric ether, a concoction called “Wasson’s Remedy”. Per usual, the medications would work for a short time and the chill would return the next day. Sometime into day three, Susan began having convulsions. She would also have cramping of such severity that her heels would strike the back of her head, or her knees would strike her chin.

It is widely believed by other doctors that took over Susan’s case that the medications that Wasson had prescribed had caused this new affliction of the illness. It was discovered that Wasson was prescribing a spoonful of the sulfuric acid which was a strong enough dose to kill three men. The reason that it did not kill her was because her condition was so severe. However, the sulfuric ether mixed with her other medications most likely caused her new symptoms.

Fearful of prosecution and a lawsuit from the Godsey family, Wasson fled the area and went to Middle Tennessee where he died a short time later.

Onset of the Sleeping Illness

For three torturous years, Godsey continued having the cramping spells and began vomiting blood. At the tender age of thirteen, Godsey began falling into a deep sleep-like state. The sleep would take on a death-like appearance and she could not be roused. While in this state, mirrors would often be held up to her nostrils and no moisture on them would give any indication of life.

She would awaken frequently, and would have intelligent and bright conversations about whatever subject would interest her. However, after five minutes of conversation she would return to her sleep. The doctors tried to keep her awake by extending the conversations, but this did not work. Before returning into the sleep-like state she would bid everyone good-bye.

She was unable to leave the bed for twenty-four years because she could not remain awake longer than a few minutes at a time. Although she was able to eat during that time and she was a very small eater. Her coal-black hair would continue to grow, but her finger and toe nails never grew again and never had to be trimmed.

As her condition began to gain notoriety, physicians from around the world began to come to study her case and soon found that her illness was beyond their understanding. One physician came from Paris, France. He used an interpreter from Hickman, Kentucky to communicate with the family and with Godsey during her times awake.

In 1867, Godsey was taken to Nashville by her family to go under the care of Dr. Robert Eve. Dr. Eve was a celebrated physician and the president of the medical collage located there. Godsey was exhibited to the medical students there but no cure could be found.

In 1870, Dr. C. P. Glover, and Dr. John Ray, along with Godsey’s family journeyed to St. Louis, Missouri to a medical college there. Even though the most celebrated physicians of the area came to study her case, none of them could come up with any answers to her condition.

P.T.Barnum would make several propositions to the family including $1000 a week and the expenses of the family if they would allow him to exhibit their daughter. Many other showmen and museum managers would also offer enormous sums of money, but the family would turn them down refusing to make money from the illness of Godsey.

This state of sleep did not keep her from getting other illnesses. People would come to pay the sleeping beauty a visit out of curiosity and would expose her to illnesses. She contracted Scarlet Fever from a visitor but no one else in the family had contracted the deadly disease. She would also get other illnesses over the years but none as dramatic as the Scarlet Fever.

As the years passed by, a theory came to be that if Susan Godsey could out live the medication that Wasson had given her, that she could live a normal life. This proved to be a possibility as she began to show signs that she could be awakened from her slumber. Sadly, because of the years of illness that had Susan Godsey had suffered her body was worn out to continue the fight.

In her last deep sleep, even the doctors could not awaken her or help her in any way. She passed away October 27, 1873, at the age of 36 to 37 years old. She was buried at the Antioch Union Cemetery in Obion County, Tennessee. There were several people who stood watch to make sure that grave robbers could not sell her body to medical science.

Death of a Woman after a Sleep of Fourteen Years.
Aug. 1, 1869
The New York Times Archives
https://www.nytimes.com/1869/08/01/archives/death-of-a-woman-after-a-sleep-of-fourteen-years.html