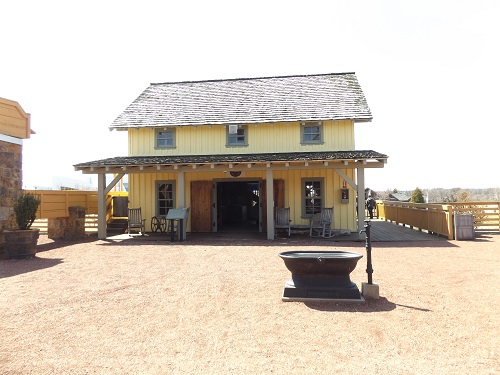 The Brewer-Austin Mill is located at the northeastern edge of North Lake in the Discovery Park of America in Union City, Tennessee.

As one of the centerpieces of the Mill Ridge, the Brewer-Austin Mill is located at the northeastern edge of North Lake in the Discovery Park of America in Union City, Tennessee.

Building of the Mill

Will Brewer is retired from the Piney Bowes and Bill Austin is a retired professor from the University of Tennessee at Martin campus. Bill Austin and Will Brewer in the summer of 2011 built the Brewer-Austin Mill. This particular mill is unique in Tennessee as it has a traditional timber frame such as mortise and tenon joints. No nails or screws were used in the construction of the building, however oak pegs were used to secure the joints together.

A hurst frame is an internal framework that is built that supports the gears and millstones. It is built like a cage around these inner workings to prevent damage to the main structure from the vibrations of the working machinery.

The Water Wheel is often located outside and turns according to the water current. This can be done by a stream, river, or a water flume. It is mounted on the axle and drives the mill by a Pit Wheel or Rim Drive. The Waterwheels in some mills have been replaced with Turbines.

The Crown wheels is the wheel that drives the mechanism and is often located at the top of the upright shaft.

The Great Spur Wheel is a large wheel that is attached to the upright shaft which drives one or more stone nuts. Where it is located determines how many stone nuts are moved.

The Pit Wheel is often mounted on the opposite end of the axle to the waterwheel. The Pit Wheel drives the Wallflower gear.

The Bedstone is the stone that does not move. This is where the corn or wheat is placed for grounding.

The Running Stone is the stone that is placed over the Bedstone and is used to grind the corn or the wheat into flour or cornmeal.

Overdrift stones are usually driven from above.

Underdrift stones are usually driven from below.

The Wallflower gear is a small gear that is the base of the upright shaft. The Pitwheel drives it.

Stonenut is a small gear that is driven by the Great Spur Wheel. The main job of the Stonenut is to move the Running Stone. This is considered to be an Underdrift stone because it is driven from below. Rarely are stone nuts considered Overdrift Stones, but there are rare ones in existence.

A turbine replaced the waterwheel in several watermills as a replacement for power. This usually happened when the Mill was modernized although there are very few mills that are built with turbines in them originally.

A Layshaft is a horizontal shaft that has the Wallflower and one or more Spur Wheels attached to it.

The Axle carries the Waterwheel. It also can carry the Pit Wheel at its opposite end.

The Upright Shaft is the main shaft that drives the machinery. It carries the Wallflower, Great Spur Wheel, and sometimes the Crown Wheel.

A Rim Drive is some waterwheels. The are a rack that is attached to the circumference. The mill is driven by a pinion mounted on a separate axle which will have a Pit Wheel attached at its opposite end.

The Austin-Brewer Mill photograph taken by the University of Tennessee in Martin.