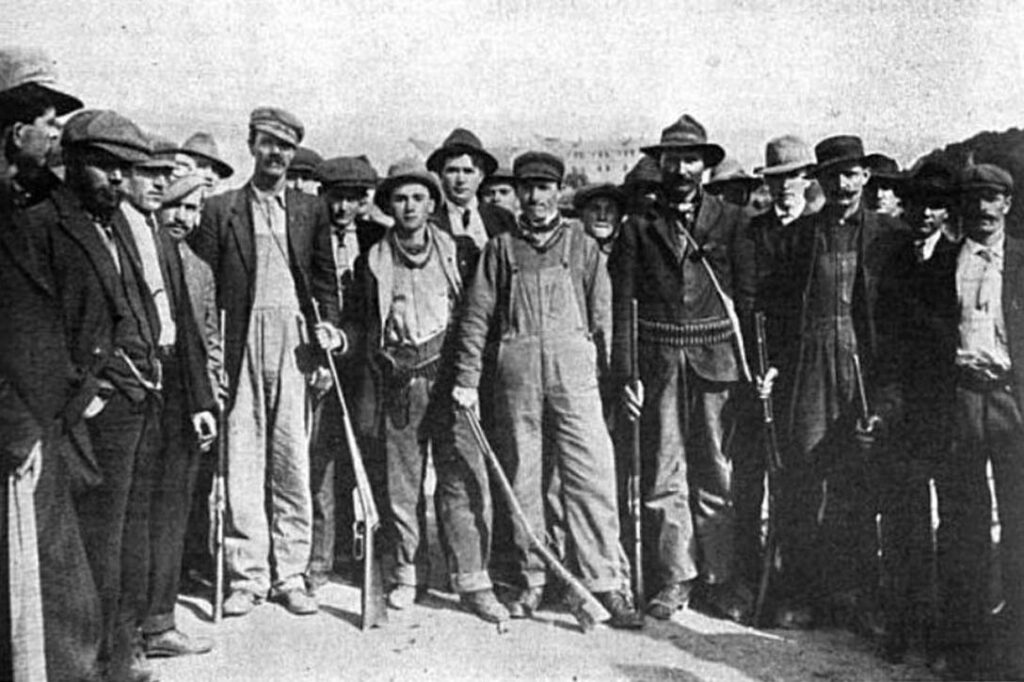 U.S. Senator John W. Kern sprang into action with the Senate's Kern Resolution of May 26, 1913 to investigate the Paint-Cabin Creek Strike.

After receiving a note from Mary Jones, U.S. Senator John W. Kern sprang into action with the Senate’s Kern Resolution of May 26, 1913. This forced the United States Senate to investigate the conflict going on at Paint-Cabin Creek. This resolution had a Committee on Education and Labor to open up an investigation into the treatment and conditions of the West Virginia coal mines. At the same time, they also began to investigate in the states of Colorado and Michigan for their copper and coal mining operations in those states.

The Committee on Education and Labor formed to Investigate

The goal of the Committee was to find out exactly how many deaths were related to the strike and identify who was responsible for them. There are estimates that the Strike itself lead to fifty violent deaths. This was not taking into account how many deaths occurred at the Holly Grove campsite of the horrible living conditions there.

During the investigation members of the Committee went to see Governor Hatfield. After talking to him, Governor Hatfield promised to release those who had been thrown into jail, the governor would also recognize the right to organize and strike with the promise that all striking miners would be returned to work.

The Committee further went on to condemn Hatfield for his stance and actions on the socialist newspapers and called for him to be censured. Hatfield denied any actions taken beyond the suppression of the newspapers.

During the month of July 1913, the strike once again came to national attention as there were huge back and forth criticisms of the investigating Committee members and false statements made in the press. This led to a fracture between the Socialist party and the unions that exist to this day. As the thought remains that the miners did not grab their guns for lofty ideas, but that was the only weapons that they had to fight to remain alive. There were two lawsuits that came out of that dispute and both of them were later dropped.

The Fight Continues Outside of the Appalachian Coal Fields

The fight would continue between Mary Jones, the United Mine Workers of America, and the Baldwin-Felts Detective Agency as they would once again come against each other later that same year. In the Colorado Coalfield War of September 1913 and the Ludlow Massacre of April 1914, the fight between miners and the operators would continue to rage.

As our page is mainly concentrated on the history of the Appalachian Mountains, it is very important to understand that the Paint-Cabin Creek Strike began a period of wars between the labor, unions, and owners and operators of the mines of this nation. Lasting between April 18, 1912, through July 1913, there were approximately 50 deaths related to the Strike directly as well as many more deaths in the Holy Grove camps due to starvation and malnutrition.

Estimates of damages from the strike and violence would cost about $100 million dollars. Even though there were hundreds of arrests made, they were released from jail and allowed to return to work. The coal operators and Baldwin-Felts were never charged or implicated in their part of the Strike, which would cause a lasting trend to this day. Paint-Cabin Creek Strike would go down in history as being one of the more violent labor confrontations in history.

We hope that you have enjoyed our series on the Paint-Cabin Creek Strike of 1912. In our next series, we will return to West Virginia for the most famous of these wars, The Battle of Matewan and the Battle for Blair Mountain. Thank you for reading and watching our articles.

PrevPreviousThe New Governor Steps In: Paint-Cabin Creek Strike of 1912 Part Four
NextMatewan Part One: Other Strikes and Wars Break Out Across the LandNext