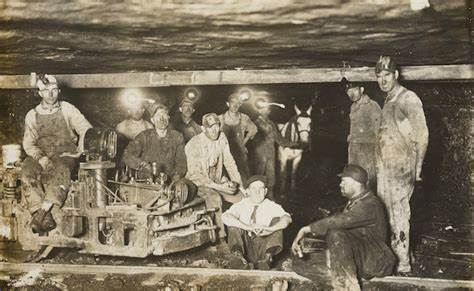 Matewan Part One: Other Strikes and Wars Break Out Across the Land

As the violence of the Paint-Cabin Creek Strike was ongoing, there were many other outbreaks of violence across the USA. Matewan would lead to Appalachian War

To understand what happened at Matewan, one needs to take a serious look at the fractious and violent labor disputes of the time. However, even with the shots no longer ringing out from the two warring families, and the Paint-Cabin Creek Strike had also cooled by this time. There was still unrest in the Tug River Valley. The Matewan Massacre and the Battle for Blair Mountain would forever change the face of mining in the United States and cement the standing of the Unions.

The Hatfield and McCoy Feud Influence

The Matewan Massacre was far more than just an extension of the Hatfield and McCoy dispute that had been raging in the area. It had been nearly thirty years since the Hatfield and McCoy feud was in full swing. By the time of the Matewan conflict, the Feud proper between the two families had cooled. The courts had ruled on the parties involved in the violence. Those who were guilty were spending their time behind bars.

There will be several times that the name of Hatfield will show up in the West Virginia Coal Wars as some major characters will appear over the course of the story. We have already seen Governor Hatfield and his “Hatfield Contract” and how he had allowed for some civil and Constitutional abuses to go on under his first term in office. There are more Hatfield family members to come and their influence over the conflict will be epic.

Lasting between April 18, 1912, through July 1913, there were approximately 50 deaths directly related to the Paint-Cabin Creek Strike of 1912 as well as many more deaths in the Holy Grove camps due to starvation and malnutrition. Estimates of damages from the strike and violence would cost about $100 million dollars.

Even though there were hundreds of arrests made, they were released from jail and allowed to return to work. The coal operators and Baldwin-Felts were never charged or implicated in their part of the Strike, which would cause a lasting trend to this day. Paint-Cabin Creek Strike would go down in history as being one of the more violent labor confrontations.

The Copper Country strike of 1913–1914 was organized by the Western Federation of Miners. The purpose of the first strike in Copper Country was to have shorter workdays, higher wages, maintain family mining groups, and have union recognition. The strike lasted over nine months. The copper mines, Calumet and Hecla Mining Company, Copper Range Company, and Quincy Mine were the three major mining operations of that time. The major event that changed the focus of the strike came on Christmas Eve 1913.

A party was organized for the strikers and their families, that was put together by the Women’s Auxiliary of the WFM. The Christmas Eve party was held in the upstairs of an Italian Hall. Hundreds of families attended. At one point during the evening, an unidentified man screamed “fire”. The stairway leading out of the building was narrow.

During the panic, 73 people, mostly children, were crushed to death in the stairwell. While the identity of the person is not known it is suspected that he was a member of the Citizens’ Alliance which was an organization for business owners, mine owners, and others who objected to the strike.

The strike was unsuccessful and was a turning point in the history of Copper Country. The Union was driven out of the Keweenaw Peninsula of Michigan because it was unable to meet its stated goals. However, there were several reforms that did come into place and the mines did continue to operate. The unions did come back into the area several decades later and were able to unionize the Keweenaw Peninsula.

The Colorado Coalfield War of September 1913

The unions felt that they could get more help with the Copper Country Strike if they coordinated a strike of the Colorado coal fields with the Copper Strike of Michigan. Between September 1913 and April 1914, the Colorado Front Range saw the largest uprising of labor against the company operators in the West. Due to deadly working conditions and low pay, the workers organized with the United Mine Workers of America (UMWA) against Rockefeller-owned Colorado Fuel and Iron (CF&I). The Colorado Coalfield War of September 1913 saw the deaths of somewhere between 69 to 199 people to make it the “bloodiest labor dispute in history”.

Tensions climaxed in the Colorado Coal Strike when in Ludlow County a tent city that was occupied by around 1,200 striking coal miners and their families were attacked on April 20, 1914, by the Colorado National Guard. The Ludlow Massacre saw the deaths of 21 people which included women and children. In retaliation, the miners armed themselves and attacked dozens of mines and other targets during the next ten days.

Strikebreakers were killed, the mine property was destroyed, and 225 miles of the area now became a war ground. The violence only ended with the Federal Soldiers showed up to calm the situation. No concessions were made to the miners after this strike was over in December of 1914.

While these conflicts did lead to 8-hour or 9-hour days depending upon the state, and some cases did make the existing laws on the books for labor more enforceable. Not a lot was being accomplished at this time in making headway for the betterment of those that were striking. And for a short time, in Michigan, the union was run out of the state for its lack of help with the negotiations.

Uneasy years had passed since the Paint-Cabin Creek West Virginia Strike of 1912, and the battles of the coalfields of Colorado and the copper mines of Michigan. A US Senate held a hearing over the treatment of the miners in all three states and had made a deal with governors to maintain peace and to have better treatment of those who were working in the mines, by instituting fair labor laws. However, this movement to improve the lives of the miners was not moving fast enough and events would take place that would make the Appalachian Mountains of the Tug River Valley explode in violence and outright war.

The issue at hand was for better pay, better treatment of the miners, and the removal of paternalism from the area. The miners were also asking for the right to unionize as well as better working conditions. Paternalism is the practice of people who have a business or other authority to restrict the freedoms of those who are subordinate to them. If those under them behave in an approved manner then they receive housing, work, food, and other “perks” of their position. If for example, they did not behave in the way the companies wanted them to, they could lose all their benefits up to and including their jobs.

We have now set the stage for the unrest that was going in the labor force at the time. Nothing had been solved, and tempers were boiling under the surface. Soon it will reach the point of boiling over, and the day of reckoning will be at hand. In our next post, we will begin in the town of Matewan and the events that lead to the Baldwin-Felts Detective Agency coming to town.

7 Things You Didn’t Know About the Hatfields and McCoys