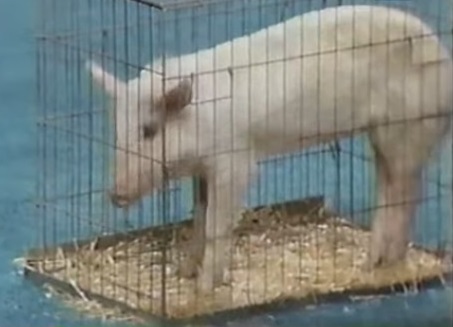 Was it for love or for a pig or both? The story of Roseanna and Johnse as well as both battles for the pig.

In part two, the Hatfield and McCoy Feud continues. We will be exploring the differences in how the Hatfield and McCoy families viewed each other as well as the Hog take one and take two. Yes, folks, there was a second go-around over a hog. And we will also look at the Romeo and Juliet story of the Feud between “Johnse” and Roseanna.

A little something about how pigs and hogs are viewed in the Appalachian Mountains. They are their own food group. Just about every meal has some pork in it somewhere. It is just the way it is. To steal a pig or to kill one is a serious offense because you were basically stealing from the table of a family.

Floyd Hatfield, the cousin to Anse, had a hog. Randolph McCoy claimed the hog was his. There were notches on the pig’s ear which gave credence that this was a McCoy hog and not a Hatfield one.

The matter was taken to a local Justice of the Peace, Anderson “Preacher Anse” Hatfield. The community that the trial took place in had a very heavy McCoy influence, however, a Hatfield presided. Testimony was given by Bill Staton, who was related to both families (was a member of the McCoy extended family by blood, but had married into the Hatfield clan).

Staton had testified in Floyd Hatfield’s favor. Justice Hatfield took his testimony into account and ruled for the Hatfields. He then removed the theft charge against Hatfield and allowed him to retain possession of the hog.

June 1880, Bill Staton was killed by Sam and Paris McCoy. Sam stood trial for the killing and was found not guilty by means of self-defense.

The actual reason behind this dispute is not clear, however, it is heavily speculated that this was due to the hard feelings that the McCoys had toward him for his testimony.

In 1979, Family Feud had a special week of taping for the Hatfields and the McCoys. It was once again a battle for the hog as well as for the money. A hog was kept on the stage during the week-long competition. The McCoy Family won the week three games to two. The Hatfields however had won more money $11,272 to $8,459. The show came to the conclusion that the winners should have more money and so they came to the decision of augmenting the McCoy family winnings to $11.273 thus giving them just one dollar more than the Hatfield family.

The Doomed Romance of “Johnse” and Roseanna

Now, something for everyone who is not from the Appalachians should know.

A word about Election Days in Kentucky. Back in the 1800s, this was considered to be a great gathering of people, it was treated more of a social gathering than an election that we think of today. It was a time for everyone to get to know those that were running for office in their local districts and meet them face to face. It was not unheard of to have an “informal” family reunion at this time. Please keep this in mind as this will also come into play with our next video covering the Election Day Murder of Ellison Hatfield on August 5, 1882.

It is not really known the date that Roseanna McCoy, Randolph McCoy’s daughter, entered a relationship with Devil Anse’s son Johnson, known as “Johnse” (spelled “Jonce” in some sources). However, it is also speculated that they met at an Election Day gathering in 1880 on Blackberry Creek, in Pike County, Kentucky.

All we know for certain is that before 1881 she had left the McCoy family household to live with the Hatfields in West Virginia. According to history, Randolph was not thrilled by Roseanna’s actions as she did this without either his knowledge or consent. Neither of the families would consent to the match.

Now the following event takes place according to which historian is relating the tale. It is unclear if this takes place when Roseanna takes up with the McCoys the first time or when they reconcile.

The McCoy family had Johnse arrested/kidnapped on an outstanding Kentucky bootlegging charge against him. When she learned of this, Roseanna made a midnight ride to alert Anse, who organized a party of men to rescue Jonse from his capture as they were trying to transport him to Pikeville, Kentucky to face the charges. At gunpoint, the Hatfield clan rescued Johnse and brought him back to West Virginia where Kentucky had no legal authority or standing.

Despite this act of love for Johnse and a betrayal to her family the McCoys, Johnse abandoned Roseanna who was pregnant with their child, for her cousin Nancy McCoy, who was the daughter of Asa Harmon McCoy. Johnse and Nancy legally wed in 1881.

What is clear is that this was a very rocky relationship as Roseanna eventually left the Hatfields to return to the McCoy family. Which she also had a rocky relationship with her family as well. The child of Johnse and Roseanna would be born in the Spring of 1881, and named Sarah Elizabeth McCoy, and die at the age of 8 months old of the measles. It is said that Randolph McCoy refused to recognize the child of Roseanna and Johnse, and also to speak to his daughter ever again, so her mother arranged for her to live with her Aunt Betty in Stringville, Kentucky.

Roseanna died at around the age of 29 to 31 (her gravestone is unclear of the year) a grave marker says that Roseanna died of grief and her will to live. She never saw Johnse again.