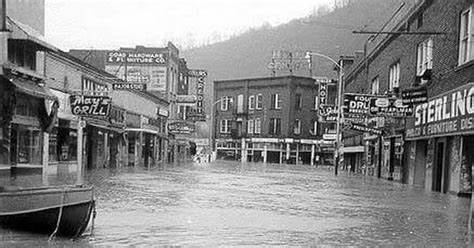 The Flood of January 27th Through February 2nd 1957

In 1957, the flood would become a devastating event that would be among the listed worst disasters to happen to the state of Kentucky.

Heavy rains are nothing new to the residents of the Appalachian Mountains. It is common for the simple little creek beds of the mountains to turn into small rivers during the months of January through May. However, in 1957, this would become a devastating event that would be among the listed worst disasters to happen to the state of Kentucky. The Flood of 1957 will live on with many residents in their memory.

While the first three weeks of January of that year were drier than usual. Temperatures were normal up to January 18, 1957. The ground in most of the area was still frozen to a depth of 1 to 2 inches and in many places snow was still on the ground.

The temperatures began to warm up between January 21 and 22 and the ground ice and snow melted. Just a week prior to the flood, there was a rain fall of 1 to 2 inches which helped to thaw the ground. This saturated the ground and so most of the following rainfall would be only runoff water.

The heavy rains began to fall on the area of Kentucky, Virginia, Tennessee, and West Virginia. Most of the affected area would report a total rainfall of 6-9 inches. However, on the Virginia and Kentucky state line as much as 12 inches of rain would fall.

The Big Sandy, Cumberland, Kentucky, and Tennessee River basins would be the most affected by the sudden surge of water. Record water crests would reach as high as 50 percent greater than previous floods on record. This flood would break the record flooding of the years 1918 and 1946.

In Pikeville, Kentucky, the Levisa Fork of the Big Sandy river rose 18 feet on January 29th. The River would crest at a height of 52.72 feet on January 30th. This would exceed the record set by the flood of 1862. Pikeville was almost completely under water from the flooding.

However in Paintsville, Kentucky the 1862 record would hold as the 1957 flood was seven-tenths of a foot shy of the record.

The weather warning system of that time was unreliable. In many places there was no warning given because of communication disruptions. Mudslides and high flood water prevented the access to many areas to give warning or much needed assistance.

At least thirty federal highways and secondary roads were deemed impassable. All of the roads that were not on the basin floor fell victim to rock or mud slides and washouts from the heavy rains.

The rise of the water levels was so rapid that many people had to be evacuated from their homes without their belongings. Many people lost personal property, livestock, food supplies, and their homes.

Many stores were flooded and lost their supplies and food stock. This caused a major food and supply shortage. In some cities the water was contaminated and could not be used. In other places there was no gas for cooking and heating. Approximately 7,700 phones and 103 long-distance circuits were knocked out of service. Electric Power was disrupted and many people did not have electricity.

Many schools were damaged from the flood waters. Several small rural school buildings were completely destroyed. School closures were also due to transportation problems.

City Services and Other Damages

The Hazard, Kentucky State Vocational School sustained $373,000 of damage and was deemed a total loss. Damage to other schools in the Perry County area are estimated to be $85,000 in 1957 currency. In Floyd County the damage to the schools was estimated at $308,000 for the entire County.

On the Pound River in Pound, Virginia and near Haysi, Virginia there was excessive damage to the area. However, none of the sources I looked at would say how much damage was done or the estimated cost of repairs.

In Whitesburg, Fleming-Neon, and Blackey lost forty bridges There was heavy flooding in some areas as the tributary streams in Letcher County overflowed. There was heavy damage to the areas of Leatherwood Creek, Linefork, and Rockhouse.

It is reported that in the state of Kentucky alone that nine people lost their lives from the flooding. The Red Cross reported that 597 homes were destroyed and 10,000 homes sustained damage from the high water.

Improvements have been made for the bigger cities to deal with flooding. While the water does rise every year, the extent of the damages are not as overwhelming.

Because of the lack of weather warning system that had an early detection system with it, many people did not have adequate time to evacuate with the 1957 or 1977 floods. The U.S. Weather Service began a system in October of 1980 to bridge that gap. With a total of 13 counties a 24-hour-a-day weather station was staffed with six meteorologist and an electronics technician. The system and station was tied into the Kentucky Early Warning System.

Pikeville, Kentucky also learned many lessons from the floods of the areas and began work on a three-phase project to move the Big Sandy River. This Project would become the Pikeville Cut-Through Project.

For more information about the Appalachian Flood of 1977 click here

Thank you for continuing to read and watch Kentucky Tennessee Living’s posts. We deeply appreciate it. Our goal has always been to bring the history back to the Appalachian Mountains.