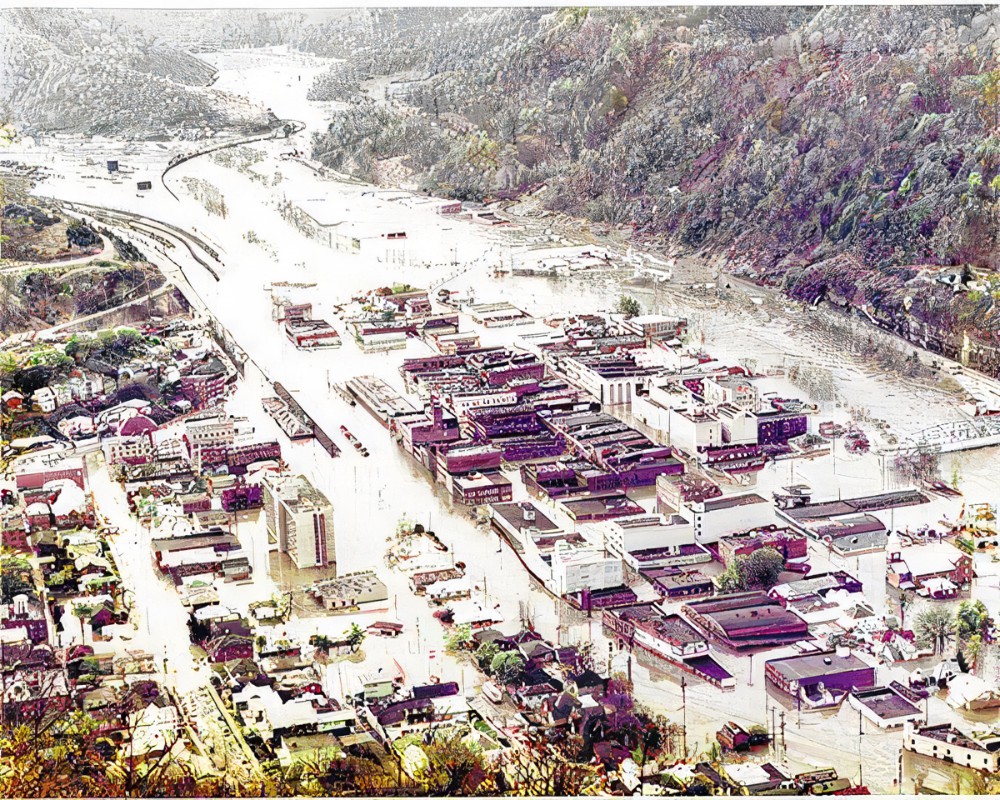 The Appalachian Flood of 1977

The Appalachian Mountains was once again pounded by torrential rains during April 2-5 of 1977.

The Appalachian Mountains was once again pounded by torrential rains during April 2-5 of 1977. Kentucky, Tennessee, West Virginia, and Virginia was once again flooded. Record flood waters were recorded in the upper Cumberland River, Tug and Levisa Forks of the Big Sandy River, The Guyandotte River, Clinch and Powell Rivers, the North Fork of the Kentucky River and on the Holston River.

This actually happened in two stages. The first stage saw a rainfall of less than one inch over between April 2-3 of 1977. This saturated the ground and made it so that the rest of what was to come runoff water.

The second stage happened between evening of April 3rd through April 5th. The rainfall levels reached as much as 15.5 inches. This created conditions for a flash flood in the area.

At Pikeville, Kentucky the peak flooding would reach 51.46 feet and was 1.26 feet lower than the 1957 flood. The City of Pikeville would have damages estimated to reach seventy-one million dollars.

Peak stages in Prestonsburg were 45.71 feet. Flood waters reached a depth of 9 feet in the town of Martin. There was one death and 117 businesses that were destroyed or severely damaged throughout Floyd County. With nearly one thousand families suffering personal property losses.

In the City of Harlan, six hundred dwellings were destroyed and two thousand families suffered personal loss. Five deaths were counted in the loss of life from the flood. The sewer treatment plant was flooded and businesses were severely damaged.

The City of Pineville was under fifteen feet of water after the water went over the tops of the levees and flood wall. In Bell County three people died, 674 injuries or illness were reported. One thousand five hundred and twelve families suffered personal losses to the flood. The City of Barbourville had been evacuated but the levees held and the town did not suffer any losses from water damage.

In Tennessee, rain had occurred on March 29-31, 1977. This storm saturated the soil with water that caused the next rainfall to become runoff water.

When the April 2-5, 1977 rains fell it caused record flooding in the Clinch and Powell River basins. The peak flood stge reached 38.96 feet which exceed the record set in 1826 by 9.4 feet.

The total damages were estimated at fifteen million dollars by the State Highway Department of Tennessee. This estimate was divided equally between roads, bridges, utilities, homes, and businesses.

In Williamson, WVa., the peak stage reached 52.56 feet and was the highest recorded since 1926 and about eight feet higher than the 1963 flood. The main business district of Williamson was protected by flood walls to an elevation of 44 feet.

Damage to the Appalachian Towns’ Tally

The overall damages caused by the 1977 flood was devastating to the area. While many of the records of the flood water was not reached or broken from the 1957 Flooding, other records sadly were.

Twenty-two people in a four state wide area of which ten people killed by flood water in Kentucky. The damages would be estimated to reach one hundred and seventy-five million dollars in 1977 currency. Damages to small businesses reached excess of one hundred million dollars according to the Offices of the Small Business Administration. The fifteen counties that were affected in the state of Kentucky were declared a disaster area.

Because of the lack of weather warning system that had an early detection system with it, many people did not have adequate time to evacuate with the 1957 or 1977 floods. The U.S. Weather Service began a system in October of 1980 to bridge that gap. With a total of 13 counties a 24-hour-a-day weather station was staffed with six meteorologist and an electronics technician. The system and station was tied into the Kentucky Early Warning System.

Pikeville, Kentucky also learned many lessons from the floods of the areas and began work on a three-phase project to move the Big Sandy River. This Project would become the Pikeville Cut-Through Project.

For more information about the Appalachian Flood of 1957 click here.

Thank you for continuing to read and watch Kentucky Tennessee Living’s posts. We deeply appreciate it. Our goal has always been to bring the history back to the Appalachian Mountains.

Please Like, Subscribe, and Share Below. Also, hit the bell for notification of future videos. And once again be sure to leave us a “Hey Y’all” in the comment section below. Thank you for continuing to support us and watch our videos.

For More Information on the Appalachian Flood of 1977