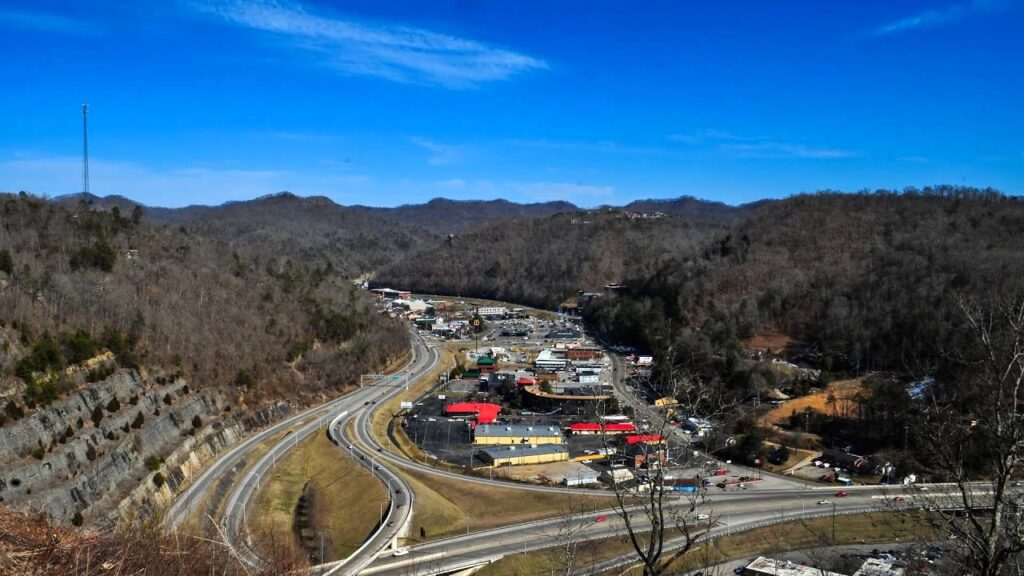 To solve many issues that the City of Pikeville had concerning flooding, a highway, lack of space for the city, and a railway. The Pikeville Cut-Through Project was proposed.

In 1957 Eastern Kentucky had a huge flood. January 29th through February 3, 1957 the headwaters of the Big Sandy River and the Cumberland River were overflowing their banks from the massive amount of rain. Several cities including Pikeville were completely under water.

This caused food shortages, people had to be evaluated from their homes without their belongings. Water supplies were contaminated. There was no gas for cooking. Mudslides and flood waters made the roads impassable. Nine people died from the flooding and 597 homes were destroyed with over 10,000 structures having major damage in the entire flooded area. It is recorded as one of the worst natural disasters in the state of Kentucky.

In 1960 Dr. William Hambley wanted to relocate the railroad that went through the city. His proposal was that the railway needed to be moved because of the amount of dust from the coal cars daily.

In 1963, due to Hambley’s efforts, a federal grant of $38,000 was given for a study to see if such a move was possible. Pikeville was named a Model City by the Model Cities Agency to generate more funding for the project.

In 1965 this idea expanded to include the Appalachian Development Highway System for Corridor B. This would insure the construction of a cut-through for the city.

Along with this expansion would come the decision to move the Levisa Fork of the Big Sandy River. This was proposed to help curb the damage that the City had experienced for many years due to floodwaters. Once the riverbed was filled in and reclaimed, this would give the city potential building sights for future businesses and other projects. The Project would be handled in three phases. But before the Project could begin, disaster struck.

April 2-5, 1977 there was a record rainfall over the Appalachian Mountains. Once again the region would be facing record amounts of flood waters. Once again the Levisa Fork in the Big Sandy River basin and the Cumberland River would flood their banks. Twenty-two people would die in the flood and the loss of property would be estimated in 1977 currency as being $400 million dollars for the entire affected region.

Peach Orchard Mountain would be split in half to create a channel for the railway, river, and highway. Construction began on November 26, 1973. There was thirteen million cubic yards of solid rock that was removed from the mountain. The final cost of this phase was $17,250,000 at its completion.

Construction began on March 4, 1980. The Levisa Fork of the Big Sandy River was rerouted and the riverbed was filled in. Coal tipples and railroad tracks were removed and relocated from downtown Pikeville. Five million cubic yards of soil was moved to fill in the riverbed and create 240 acres of new land for the City of Pikeville to use in their expansion projects. The final cost of this phase would be $22,200,000.

Construction began on March 15, 1983. In downtown Pikeville there would be new flood walls, a new bridge, downtown interchanges, and the former railroad bed would be changed to Hambley Boulevard. And additional 150 acres would be added to the City of Pikeville for future projects. The final cost of this phase of the project would come in at $19,700,000.

Hambley is often touted as the man who moved a mountain for a city. He was surgeon and well respected doctor before his tenure as a mayor. Hambley was able to organize twenty federal, state, and local agencies into completing the task of the Pikeville Cut-Through Project. He oversaw each phase of the project to make sure it stayed on task. A monument stands in Pikeville City Park in his honor for the work he did for the City of Pikeville. Hambley served as Pikeville mayor from the years of 1960-1989.

This concludes our story on the Pikeville Cut-Through Project. Thank you for continuing to support us here at Kentucky Tennessee Living.

For more information on the Pikeville Cut-Through Project

Remembering the Flood of ’57
https://www.weather.gov/jkl/1957flood

Flood of April 1977 in the Appalachian region of Kentucky, Tennessee, Virginia, and West Virginia
https://pubs.er.usgs.gov/publication/pp1098#