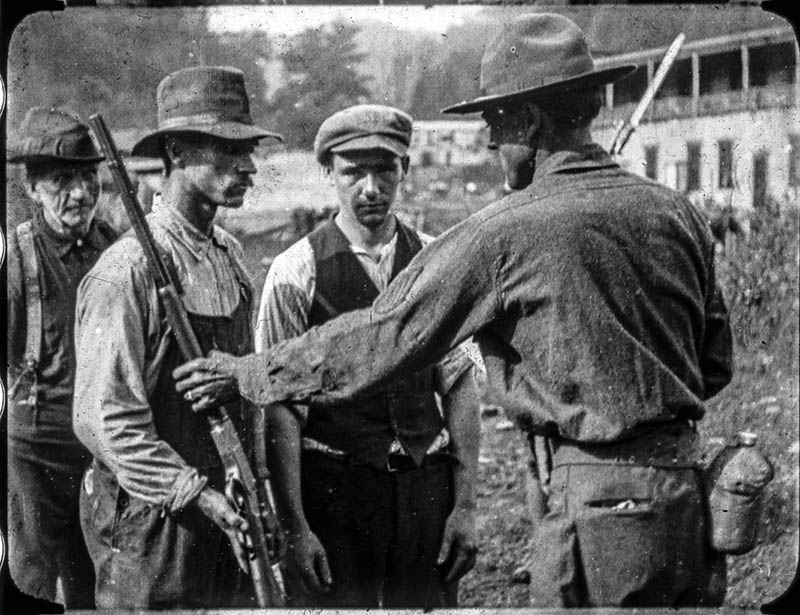 The Battle of Blair Mountain: War in the West Virginia Mountains

Tensions were high and the march toward Blair Mountain would soon begin. The Appalachian Mountains would once again be at war.

The Reaction to the Assassinations

Miners were outraged by the assassinations of Hatfield and Chambers. They understood that the assassins would not face punishment for the crimes. The miners then organized and armed themselves across the state of West Virginia. Tensions were high and the march toward Blair Mountain would soon begin. The Appalachian Mountains would once again be at war.

One source states that the Little Coal River was the first to organize and began patrolling and guarding the area. Sheriff Don Chafin sent troopers to stop the activity. However, the troopers were captured, disarmed, and sent fleeing from the area.

Frank Keeney and Fred Mooney were leaders of the United Mine Workers (UMW) union District 17. They called for a rally in Charleston, West Virginia. There they met with Governor Ephraim Morgan and presented him with the Union’s demands. The Governor refused these demands.

Within a few days, thousands of union supporters came to the outskirts of Marmet, which is near the state capital of Charleston. According to one source, between 5,000 to 20,000 miners gathered in Lens Creek. Both sides were intent to march to Matewan. Some were already armed, others gathered arms and ammunition on the way with the help of the town that were along the path to Matewan.

Lead by Frank Keeney and Fred Mooney, on August 24, 1921, they marched upon Mingo County to confront the coal companies, to organize the county, free the imprisoned union men there, as well, and to end martial law. Many of the marchers were World War I veterans.

To distinguish themselves on the battlefield, the miners tied red bandanas around their necks. This was so that they could be seen by their fellow miners and not be shot accidentally through the wooded area. Many historians believe that this is where the term “redneck” comes from to this day.

In that number were between 2,000 and 3,000 Baldwin-Felts agents, county police, state militiamen, deputies, citizen militiamen, and state police. The men had constructed machine gun nests and trenches around the base of Blair Mountain and prepared themselves for the arrival of the marching miners.

At the last minute, Keeney and Mooney tried to stop the march. They had met with the War Department’s General Harry Bandholtz. The General had warned the men that any violence would be blamed upon the union. A ceasefire was proposed but collapsed when two miners died in a skirmish with Sheriff Don Chafin and his men.

The 5,000 to 20,000 union miners had reached the border of Logan County and had begun trading gunfire with the company supporters. Both sides met at Blair Mountain, West Virginia. The fight began between the miners and the blockade. Sheriff Chafin had fewer men but was better armed with rented aircraft, machine guns, and bombs.

President Warren G. Harding threatened to enact martial law in West Virginia in all the counties affected by the conflict. Those Counties were Boone, Mingo, Logan, and Kanawha. He gave the ultimatum that the fighting had to cease by noon on September the first of that year.

Also standing at the read were troops from the 26th and 19th Infantry divisions at Camp Dix, New Jersey and Camp Sherman, Ohio. The troops could be sent by train to West Virginia when needed.

The heavy fighting started when a group of 75 miners led by Reverend Wilburn came across a group of Logan’s Defenders on a ridge. Each side asked the other for the password when the wrong one was given, the fighting started. Three deputies and one miner were killed in the skirmish.

Later that day, the main group of miners gave a two-pronged attack against the trenches and breastworks of Logan’s Defenders. Using machine gun fire from higher ground, the defenders were able to push back the Redneck Army despite their overwhelming numbers.

The Redneck Army had looted the Company Store, got a Gatling gun, and assaulted a spot called Craddock Fork. Fighting went on for three hours as the Defenders were using their machine gun. When the machine gun jammed, the miners made a huge surge forward and broke the defensive line, only to be pushed back by a second machine gun.

Chafin had chartered three private biplanes and had them equipped with homemade bombs, pipe bombs (loaded with nuts and bolts), and tear gas. This effort failed to inflict any casualties even though they were dropped over two of the Redneck Army’s strongholds.

A squadron of US Army reconnaissance planes began patrolling the skies on this day and the next day. And troops from the US Army and Army National Guard led by William Eubanks, a McDowell County native, arrived and started unloading equipment.

Ignoring the threat, the union leaders continued to encourage the miners to continue fighting. Two thousand, five hundred federal troops arrived with machine guns and armed military aircraft. They also brought gas bombs and explosives that were used in World War I. Seeing that they were now fighting a losing battle, the miners and the unions backed off and disarmed themselves. The fighting, however, continued in some areas until September 4th. Around 1,000 miners surrendered to the army while the rest went home.

While the numbers of the dead have never been confirmed, there are estimates of 20 to 100 killed on the miners’ side and 30 killed on the Chafin side of the conflict. There were hundreds more wounded or injured. It is estimated that one million rounds of ammunition were fired during the days of the battle.

Many faced the charges of murder, conspiracy to commit murder, accessory to murder, insurrection, and treason against the state of West Virginia for their participation in the march from Lens Creek to Logan County and the ensuing Battle of Blair Mountain.

These charges were levied against 550 to close to 1000 miners and labor activists including Keeney and Mooney. After all the legal battles most were acquitted while others spent years in prison. However, the legal battles had taken a huge toll on the bank accounts of the UMWA. The union’s membership also dropped by half in the years between 1921-1924. This membership further dropped to just a couple of hundred miners by 1930.

We hope that you have enjoyed learning about the Matewan Massacre and the Battle of Blair Mountain. We thank you for supporting our page.

PrevPreviousMatewan Part Three: The OK Corral of the East and Murder
NextCasey Jones: Part One An American HeroNext