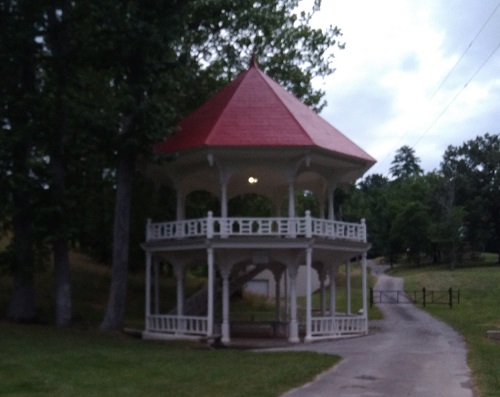 Located between Bean Station, and Rutledge, Tennessee. The site is located on Highway 11W to the right of Kingswood School. The Gazebo and Spring House are listed on The National Register of Historic Places in 1973. They are one of the last remnants from the Tate Springs Resort, a popular world-known resort of the late 19th and early 20th centuries. The hotel was destroyed by fire in 1963, and the only remnants of the complex are the cabins of the site, the pool bathhouse, and the springhouse. The resort was visited by many wealthy and prominent families such as the Ford, Rockefeller, Firestone, Studebaker, and Mellon families.

The water has been bottled and at one time was widely distributed. The Native Americans prized the water for healing of specific eye diseases, stomach, kidney, and liver diseases, and was a place of healing for all as long as the patient and the members of the tribes who came with them were all unarmed.

The land, springs, and gazebo are now part of the Kingswood School. The gazebo can be rented out the gazebo for weddings and parties.

The photographs were taken by Joanna Adams Sergent of the Tate Springs Gazebo and Spring House located on Highway 11W between Rutledge and Bean Station, TN.

For more information, you can view these pages: