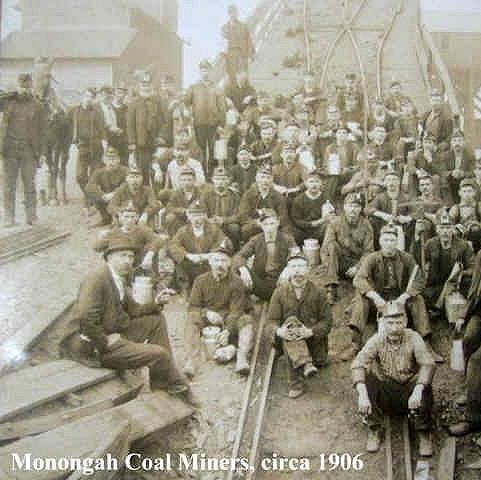 December 6, 1907, will forever be associated with Monongah WV and as the date of the "worst mine disaster in America's history"

Fairmont Coal Company had two mines in Monongah, West Virginia. The number 6 and number 8 were located on the Monongahela River about six miles south of Fairmont, West Virginia. At that time, the Fairmont Coal Company ran model mines and was at the forefront of using electrical equipment in the extraction of coal. It had huge ventilation mechanical fans, electrical coal cutting machinery, and locomotives to haul the coal out of the mines.

The morning of December 6, 1907, will forever be associated as the date of the “worst mine disaster in America’s history”. This disaster, would take the lives of at least 360 men and give birth to the United States Bureau of Mines.

This disaster could have been a lot worse than as it was. As it predated the Fair Labor Standards Act of 1938 (FLSA), by three decades. Officially there were 367 men who showed up for work that morning.

According to one source, the explosion occurred at 10:28 a.m… Most of the men inside of the mine died instantly. Because of the explosion, the blast caused a great deal of damage to the mine and the surface. The ventilation systems and mechanical fans were destroyed. Brick stopping that was used to direct airflow through the mines was blown apart. The roof collapsed because the mine timbers supporting the roof were blown down or destroyed. All of the roofs and walls were compromised. Rail cars and other equipment were damaged beyond repair.

According to one source, a miner had been operating a trainload of coal cars up the shaft from the processing plant. One of the couplings broke loose and sent the eighteen two-ton coal cars speeding down the mine shaft. When the cars crashed into the mining wall they had cut the electrical cables that ignited the coal dust in the air.

The wreckage from this accident was scattered for 250 feet with the cars piled on top of one another. The cars were found nearly blocking the entrance to the number six slope.

It is also believed that because the Fairmont Coal Company’s number 6 and number 8 mines were connected this contributed to the size of the explosion. This connection allowed for more casualties.

Also, this mine had been using mechanical equipment that was in its early stages of development. This is thought to have contributed to the amount of coal dust in the air which would have made the fire more likely.

There was also a lack of watering and dust removal systems in the mines or up to standards. The immigrant workers in the mines were not aware of this and it is believed that this also played a factor in the safety of the mine.

Because of the severe damage to the mine, an official investigation into the cause of the mine explosion was hampered. It is believed by officials that an electrical spark or one of the miner’s open flame lamps ignited the methane gas or coal dust.

The goal was to bring out as many men as possible alive out of the mine. The first volunteer rescuers were on the scene and into the entrance of the two mines within twenty-five minutes. In a vain attempt to protect themselves, the rescue miners covered their faces with strips of cloth and coats to be able to breathe in the gaseous conditions.

The first responders could only stay in the mines for fifteen minutes at one time before they became overwhelmed by the gases involved. Five miners, one Polish and four Italian miners did survive and was rescued.

Because the ventilation system was destroyed in the explosion, it very quickly became a recovery effort instead of a rescue. The gasses quickly suffocated anyone who survived the initial blast that was trapped in the mine.

It took five days to bring out 337 men from the mine. It took a further week to bring out 17 more men and the last 8 were brought out two weeks later. There were several cases were entire families were wiped out from the disaster, leaving only the widows and distraught mothers behind.

The official death toll in the mine was 362 miners. Among those that did not make it were 171 Italian migrants, 94 Slavs from Austria-Hungry, and the rest were composed of Polish, Czechs, Slovaks, Serbs, and Ukrainians. The rest of the miners were Americans from the area.

There are five toxic gas combinations to human and animals that can occur in coal mining. The Fire-boss position was created to detect these gases before they became dangerous. The five combinations are called: Blackdamp, Whitedamp, Firedamp, Stinkdamp, Afterdamp. These are important because these gases played a huge part in why the rescue attempt for this mine disaster failed.

Blackdamp happens in coal mines and other places such as sewers, wells, and ship holds. Basically, when a coal seam or other source of coal is exposed to the air in a poorly ventilated mine shaft or poorly ventilated storage areas, it begins to absorb what oxygen is left in the air leaving the carbon dioxide, nitrogen and water vapor behind.

Whitedamp is when coal explodes and a noxious gas is formed. It forms usually in the enclosed environment of coal mines. It is often composed of carbon monoxide and Hydrogen sulfide

Firedamp is also found in coal mines and is composed of several flammable gases, methane is the most common. Most commonly found in bituminous coal seams. Most often these coal seams are filled with methane gases which can trigger explosions. If a pocket of firedamp was highly pressurized it would be called “bag of foulness” historically.

Stinkdamp is hydrogen sulfide. This highly flammable and toxic gas is heavier than air and can accumulate in coal mines. Although at first these pockets smell like rotten eggs, the smell can quickly disappear as it deadens the sense of smell and this makes the pockets very dangerous.

Afterdamp is the toxic mixture of gases that form after a mine explosion from firedamp. When mixed with coal dust this can make a second explosion more likely. It is composed of mainly carbon dioxide, carbon monoxide, nitrogen, Hydrogen Sulfide, and Methane. The carbon monoxide component of Afterdamp is what makes it so deadly.

The public began to demand oversight of the mining operations. This was due to the explosion at the Monongah mine as well as other mining disasters.

In 1910, the United States Congress created the United States Bureau of Mines. Its main function was to investigate and inspect mines to reduce the likelihood of future explosions and loss of life. It also had the goal of limiting the waste of human and natural resources.

The Bureau of Mines would also set up field offices to train crews, investigate disasters, and provide rescue services. However, the Bureau was given very little power to enforce mine regulations and safety. This would change in later years. But Monongah was the first disaster to start the chain to lead to safety and health regulations for the miners.

Other Coal Mine Disasters

Scotia: 1976 The Twin Mine Disaster

Naomi Mine Disaster of 1907

Worst mine disaster in US history
https://www.appalachianhistory.net/2016/12/worst-mine-disaster-in-us-history.html