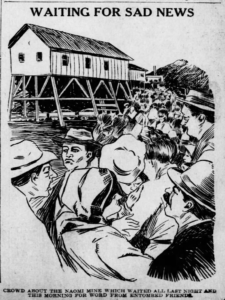 The first of five devastating mine explosions would occur in the Naomi Mine. We will only cover Naomi, Monongah, and Darr as they were the catalyst for change.

December 1907 would mark the bloodiest month in U.S. mining history. There would be five major mine explosions. This would include the mines of Naomi mine explosion, the Monongah Nos. 6 & 8 disaster, the Yolande explosion, the Darr disaster, and the Bernal Disaster. A total of 703 miners would be lost to these disasters, and a Bureau of Mines would be created to try to help solve the safety issues of the industry. We will be covering these mine disasters for the next couple of weeks as they are important to the establishment of the health and safety regulations in the mines today.

The first of these five devastating mine explosions would occur in the Naomi Mine. Situated just east of the Monongahela River, the mine was located two miles from Fayette City, Pennsylvania. The Pittsburgh coal seam was at a depth of 160 feet below the surface. The mine used coal cars that had electric motors.

On the evening of Sunday, December 1, 1907, during the night shift at 7:15 p.m. disaster struck the Naomi Mine. The number of men that went to work that night was of a low number because of the Sunday night shift. Only 35 men of 350 worked that night.

At least 35 miners would fall victim to the explosion or to the afterdamp gases as there were no survivors. The force of the explosion was of such a great magnitude that people from miles away felt the shock from it.

The shock wave had caused the entrance to the mine to collapse and the deadly fumes from afterdamp had caused the remaining passageways to fill with toxic gasses. Many of the passageways were also filled with the timbers that held up the mine roof as they had been blown away by the force of the explosion. The ventilation shaft was destroyed as the bricks and concrete was blown out of the area.

Only one man, whose name is unknown, managed to reach the surface only to to die shortly later from exposure to the afterdamp gases.

There were several mine inspections to determine the cause of the explosion these were held on February 26, May 14, August 5, and November 12 of 1908. Poor ventilation allowed pockets of firedamp to accumulate in the mine. The cause of the explosion is believed to be from an electrical arc or an open light from a miner’s hat that ignited the firedamp mixed with coal dust. However, many inspectors of the day did disagree as to the point of origin of the explosion. There was not enough evidence to blame the mine operators for the conditions of the mines. However, several safety measures were not heeded at that time.

The company did have the right under the law of the time to use any source of power it desired as long as there were open lights. It was not realized by the company that Naomi mine was a gaseous mine even though a fireboss did testify that he had reported the fact to the management. It is thought because the Superintendent and the Mine Foreman was hired just two months prior to the explosion that they were not fully aware of the entire situation building in the mine.

Several miners who were unemployed because of the explosion went on to work for the Darr mine located nearby. On December 19, 1907, many of them would die in that mine explosion.

The list of the five deadly mine disasters of December 1907

Other Mine Disasters that Kentucky Tennessee Living Covers