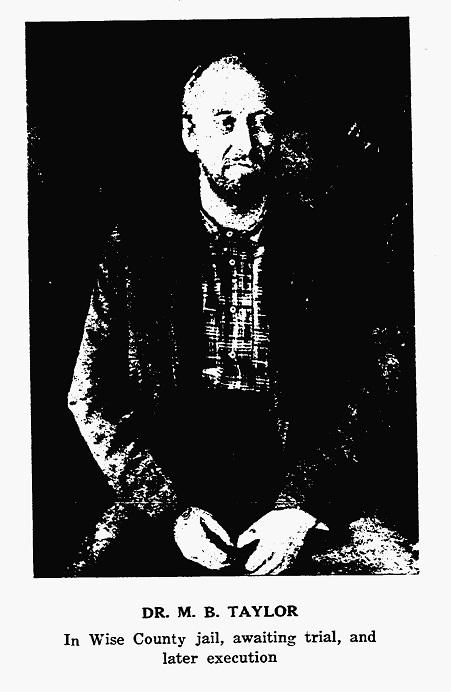 Dr. Marshal Benton Taylor was the son of a Scott County farmer, whose family was well known throughout South West Virginia.

Dr. Marshal Benton Taylor was the son of a Scott County farmer, whose family was well known throughout South West Virginia.

Early in life, he had decided to study medicine and became the pupil of his uncle Dr. Stallard, of Lee County Va at a time when medical colleges were few and distant.

He had only practiced medicine for a few months when he answered the call of Virginia for troops in 1861. He joined the 64th Virginia Mounted Infantry but within a few months, he returned home telling friends and family that he had had enough killing and did not want anymore.

Return to the Appalachians

He soon resumed his professional duties as a doctor, his patients were widely scattered in a sparsely settled section along the border of Virginia and Kentucky. Eventually, he would also become their spiritual advisor, first as a preacher in the Methodist Church and later of the Swedenborg faith.

The Assassination of Robert Moore

He lived for some time in Letcher County Kentucky and spent many quiet years of life enjoying the company of friends and the confidence of his patients. In 1876 he was accused of the assassination of Robert Moore, an outlaw of Wise County, who was shot and killed in his own home in the presence of his wife late one night.

The evidence was not conclusive, but Moore’s neighbors were convinced that Taylor was the murderer; he was soon arrested and was acquitted of the crime at trial because no direct testimony was given against him.

In 1889 the United States Marshall for the western district of Virginia appointed Taylor his deputy for Wise County Va, Taylor immediately began a campaign against the moonshiners in the mountainous areas of the twin states.

Doc soon developed a reputation as a revenuer among the people of the mountains often stopping wagon loads of non-stamped whiskey as it crossed between the two states… But Doc would gain his reputation as a lawman in the extradition and trial of Talt Hall.

We don’t know when Doctor Taylor gave up being an Untied States Marshall, but we do know that his last acts as a Marshall happened in January and February of 1892, when he went to Memphis, Tennessee for the transport of Talt Hall and guarded his person until the trial was finished in February. When the Killing Rock murders happened, Taylor was no longer a United States Marshall.

This was deeply personal to Doctor Taylor because Talt Hall had been involved in the murder of Police Chief Hylton of Norton, Virginia. The Sheriff’s wife was the sister-in-law to Taylor’s son Sylvan.

The Shooting of Ira Mullins

There is a tale where Doctor Taylor was involved in a shootout. Taylor and his posse rode into the town of Wise in pursuit of a wagon load of whiskey owned by Ira Mullins, where a gunfight exploded on the streets in front of the courthouse.

According to the Oft Told Tale, approximately 250 bullets were exchanged leaving the driver of the wagon dead and several others injured. It is said that Ira Mullins was shot and paralyzed during this event in Wise, Virginia. According to the Oft Told Tale, Doctor Taylor was fired from being a United States Marshall for the shootout. But there is no historical record that we can find of a shootout happening in Wise, Virginia.

However, there is a newspaper article that says that Ira Mullins had received his paralyzing injuries in a shootout with Revenuers in Mountain Home, Tennessee over a year prior to the Killing Rock Massacre.

Most people figure that it was the shootout at Wise, Virginia that started the feud between Doctor Marshall Benton Taylor and Ira Mullins. However it is of particular interest to note that Taylor would become a Federal Marshal in 1889 two years after the death of Henry Vanover and start his war against moonshiners, It is also telling in the fact that Taylor chose the pursuit and capture of Moonshine runners coming from Kentucky into Virginia. Taylor was known to camp out at what is now known as Raven Rock and spy on the road below using his 5-foot spyglass and then set a trap for the runners at the top of the mountain.

Talton Hall had been suspected in the murder of 19 men in Perry County… although a large reward was offered for his capture and arrest, no one wanted to go after Hall because of his reputation… However, on July 14, 1891, Hall murdered Police Chief Hylton of Norton, VA…

Knowing there was too much evidence against him Hall fled the area and went to Memphis, TN where he was finally captured. Memphis police needed a lawman and Hylton’s widow to come to Memphis, Tennessee to positively identify Hall and extradite him back to Gladeville (now Wise) Virginia for trial… Doc Taylor volunteered to go for personal reasons… His daughter in laws sister was the widow of Hylton and Hylton had been a close personal friend of the family.

Upon their return, Doc extended his personal duties to guard Hall as there had been many attempts to release him from the Wise Jail during the week of his trial. After sentencing, Taylor would once again transport Hall to Lynchburg, Virginia to await his execution.

It was sometime after the delivery of Hall to the Lynchburg jail that Taylor would resign his post as a United States Marshall. “Bad Talt” Talton Hall was executed by hanging for the murder of a police officer on September 2, 1892. He was 42 years old.

Three months after the delivery of Talton Hall to the Lynchburg, Virginia jail would the events of the Killing Rock Massacre would transpire. There is an Oft Told Tale that Taylor left his guard duties in Wise, Virginia to commit the crime. This is now debunked as Hall was in the Lynchburg jail at the time of the murders.

Many of the following sources are no longer available online

The Hanging and History of Marshal Benton “Red Fox” Taylor