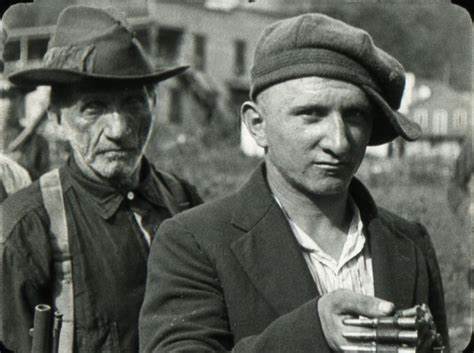 The non-union mine workers of Paint Creek went on strike in an effort to force the Coal Operators into negotiating a pay raise. The trouble now begins

The trouble began when the non-union mine workers of Paint Creek went on strike in an effort to force the Coal Operators into negotiating a pay raise. During the first month of the strike, the miners stopped work and peacefully protested. Then the 7,000 workers on Cabin Creek joined the work stoppage. The Coal Operators responded with an effort to force the miners back to work. They did so by evicting the striking miners and their families from “company-owned” houses. Although the UMW (United Mine Workers) had not initiated the strike and were not involved in it. They responded to the news coming out of West Virginia by sending Mary “Mother” Jones and UMW Vice-President, Frank Hayes to the striking miners. Jones and Hayes formally organized the miners by setting up “Tent camps.” These camps provided temporary housing for the striking miners and their families. In addition, the camps provided food and other basic necessities for the strikers and their families. Then, when it was least expected, the real trouble began.

Trouble began brewing on May 10, 1912.
The coal operators of Paint and Cabin Creeks decided to break up the strike. They hired the Baldwin-Felts Detective Agency as Strikebreakers. The Agency was a well-known private security firm and is still known today, 84 years after they shut down. They had a violent history with miners and other industrial workers across the country. They were often hired by coal operators from the West and the Appalachians for their violent tactics to bust up unions. Baldwin-Felts sent Albert Felts, Lee Felts, and Tony Gaujot along with 300 armed mine guards to the area. During this time the guards built iron and concrete forts outfitted with machine guns throughout the area. These forts are called “Pillboxes”.

The trouble began by forbidding Striking miners and their families from using the roads, bridges, utilities, or running water that the mines had provided. They were forcibly evicted from their company-owned homes. Their personal property was destroyed. The people were not allowed into the company stores or allowed other company services. Anyone attempting to leave on a train, which was considered to be owned by the companies, was dragged off of the train and beaten if they tried to board. The coal companies hired replacement workers. Almost daily there were reports of beatings, sabotage, or sniper attacks.

The United Mine Worker’s Journal of June 13, 1912, reported that there were two coal miners who were shot and murdered by the Company Guards. It was reported that one of the miners killed had wandered onto the Mine’s property in search of a stray cow.

It was during this time in June that Mary Mother Jones had arrived in Paint and Cabin Creek to see all of this happening. The first thing she did was have the Socialist Party of America help the miners to acquire weapons to fight back.

Between the time she arrived and through July, Jones had made her way through armed guards to Eskdale, West Virginia. Her main goal was to rally 3,000 men to strike and secretly march to the steps of the state capitol in Charleston, West Virginia. There she read the Constitution of the United States and read a declaration of war to Governor William E. Glasscock.

The Arrival of a Militia

Governor William E. Glasscock sent a militia to the area to calm tensions between the miners and the coal operators. Governor Glasscock also appointed a commission to look into why there was a huge dispute between the parties.

The militia was at first welcomed by the miners as they thought that they would make the Baldwin-Felts agents back off and protect and restore their rights and establish peace. However, it was not very long before the militia joined forces with the agents and the coal operators and began forcibly evicting people from the company-owned homes. These actions made it very clear that the militia was sent to break up the strike.

Governor Glasscock had no choice but to declare martial law when on September 1, 1912, 5,000 miners from the north side of the Kanawha River joined together with the strikers at their tent city in Holly Grove. Glasscock sent 1,200 state troopers into the area to lessen the tensions. The troopers confiscated arms and ammunition from both sides of the dispute.

The miners were forbidden to congregate. The troopers also went further in setting up military courts that held unfair, and fast trials. Strike zones were considered to be under the jurisdiction of the militia and military courts were established in these zones. They used military commissions to hold trials against those that they deemed to be offenders during the strike, with harsh punishments handed out. The offender’s right to a defense counsel was denied along with other rights. This was a clear violation of the US Constitution.

Meanwhile, under these conditions, the striker’s families began to suffer from hunger, unsanitary conditions, and the cold weather at the Holly Grove tent city. During this time Mary “Mother” Jones joined with Ma Blizzard and organized an “umbrella march” with other pro-union women that marched through the valley with umbrellas in hand, to protest the treatment of the strikers and their families.

The decision was made and on October 15, 1912, and the first martial law was lifted.

We will end this section here with the first martial law being lifted and everything seems to be ok again with the Paint-Cabin Creek area. In our next post, we will discuss the second and third declaring of Martial law as well as more battles that occurred during that time.