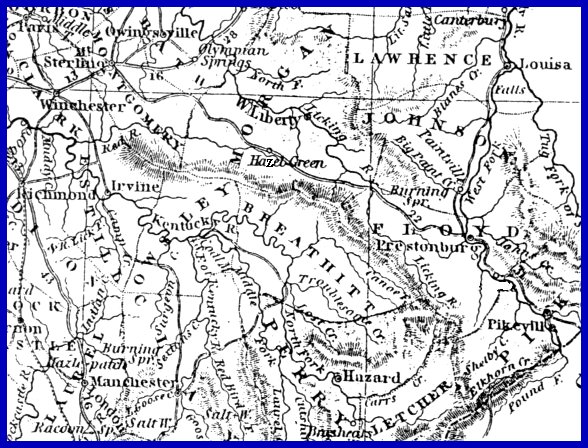 Here at Kentucky Tennessee Living, we strive to keep this site nonpolitical in nature. All historic events posted that changed the lives of future generations in Letcher County. And have helped to give miners a voice in their working and living conditions. As well as we remember those who fought on both sides of the Civil War. These events are for the benefit of remembering who we are as the Appalachian people. This is a light summary of the events surrounding the Battle for Pound Gap. Future videos and articles will be in more detail.

Between the years of April 12, 1861, and May 9, 1865, the War Between the States raged. The peace of the Appalachian Mountains shattered. A brother took up arms against his brother. There are many ghost stories to this part of our history. It is no surprise that there are two in Letcher County. This will be covering the one on Pine Mountain. Our next story will cover the troop of soldier riders in Whitesburg, Kentucky.

The Battles for Pound Gap

Pound Gap’s location is on the state line between Kentucky and Virginia. During the Civil War, the North and the South realized the importance of the road to the State of Virginia. They used this road to move troops into battle areas in Kentucky. It was also used as a thoroughfare. So that moving troops between Central and Eastern Kentucky became an easier task.

In 1861, the Confederate States Army, under the command of Colonel John S. Williams, took control of Pound Gap. Confederate State troops maintained large camps on both sides of the Pound Gap on March 16, 1862.

General Humphrey Marshall and His Troops

Before the Battle of Middle Creek, General Humphrey Marshall had his troops vacate their trenches at Hager Hill. Then he marched his four regiments up the Prestonsburg Road. This was at the mouth of Abbot Creek which intersected with the Pound Gap Road at that point. Marshall used this point to station his troops. Because Garfield was pursuing him from Paintsville. Marshall had received intelligence about Garfield. That Cranor’s 40th Ohio was moving east from Licking Station to reinforce Garfield. He was in a perfect position to intercept either of these forces. Before they had the chance to combine against him.

This area also afforded Marshall a route out of the area if he won or lost the battle and had to do a hasty retreat. As it turned out, it was a retreat. The retreat went to Hueysville. He then established a new camp at the Joseph Gearheart Farm for a week. According to tradition, one unnamed Confederate Soldier died. And buried at the Gearheart Cemetery. While other soldiers burned fence posts to keep warm. Marshall then moved his troops to the Johnny Martin farm for rest and a warm welcome.

Approximately eight hundred Union Troops marched through deep snow. They were under the command of Brigadier General James A. Garfield. They used “squirrel trails” to make their way. Going from Pikeville (then Piketon), Kentucky. The plan was to outflank and surprise the five hundred or more Confederate State troops. They were under the command of Major John B. Thompson.

The fight lasted less than 20 minutes and the rebels fled leaving everything behind them. General Garfield then burned several buildings. This was to prevent the Confederates from taking back their camp.

There was once a Southern Army Camp consisting of seventy-one log buildings to hold the area. President Garfield (then a General) camped out for two weeks. His location is where the Jenkins Post Office now stands. General Garfield captured and burned seventy-one buildings. Garfield then left a small regiment to guard the area. This is one of the few mistakes he made during this war. General James Hunt Morgan (of the Morgan’s Raiders) later came through this area. Morgan met no resistance as they overtook the area once more.

On June 1, 1864, John Hunt Morgan would lead his men against a small Union detachment from Pound Gap. They became known as the Morgan’s Raiders. They would use the Pound Gap as a way to gain access to Central Kentucky and then again as an escape route.

At the time, Brigadier General James A. Garfield was the youngest Union General of the War. Garfield gained fame from his battles. He later became President of the United States.

Several times throughout the Civil War, the Pound Gap would exchange hands. The area served as a transit supply route by both Generals Burbridge (Union) and Morgan (Confederate). As well as many others during the War.

There have been many witnesses that have claimed to see a swaying lantern in the dark around Raven Rock. Raven Rock is a large rock that juts out from the Pine Mountain overlooking Jenkins, Kentucky. The cause of the disturbance. A ghost thought to be to a lonely soldier on the watch for any Union Scouts from General Garfield’s Troops.

Which battle this comes from is unclear. As there were many times that there would be conflict on the mountain. And General Garfield would be in the area hunting down Confederate Troops. The way the legend goes, the Sentry had fallen to sleep in some brush. From here we have two stories.

One story says that it was Union Scouts that had surprised the Sentry and he ran to warn his troops. Forever blaming himself for falling asleep and the loss of ground and men. The Sentry would stand guard for all Eternity so that it would not happen again.

The second story says that the Sentry fell asleep, and his own fellow troops caught him. They were terribly upset with him for falling to sleep when Garfield and his men were so close to them. They took the man and executed him for dereliction of duty while in a time of war. The Sentry would stand guard in this story for all eternity to make up for going to sleep on his watch.

Long ago many people figured out that the “Ghost Lights” were not a good sign and learned to never trust them. They lead the person who sees them to their deaths. Many see them as floating lanterns, flames, lights, and orbs. They have many names. Such as corpse candles, ghost orbs, pucks, hinkypunk, and Jack-o-the-lanterns. They are well known to be mischievous.

Most of the tales surrounding the lights have to do with a man who walks with a lantern because of his misdeeds. His name is usually Will or Jack. Granted a lump of fire coal or fire flame from hell to light the path on his journey throughout time. Denied entry into heaven or hell because of his deeds. Forever doomed to walk the earth for eternity.

Other explanations for the lights are goblins, miscarried or died too young children. Others are fairies and leprechauns. Science has tried to explain these lights. Some explanations are weather, gas pockets, electrical charges from dying matter. Whatever the explanation, Will-o-wisps do exist.

For more information on the Restless Soldier

Now’s your chance to meet the ghosts of Letcher County
October 19, 2016, Mountain Eagle