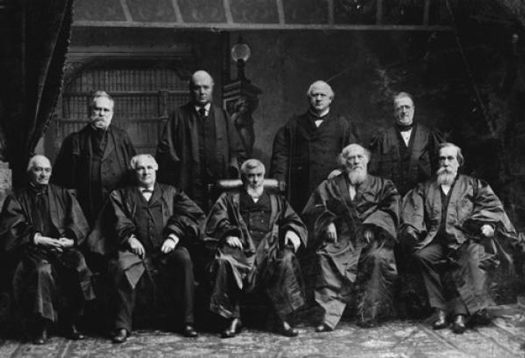 The Hatfield and McCoy Feud has now reached the point that the Supreme Court will rule on state extradition and bounty hunters.

We have one confirmed death of two children, Calvin, and Allaphare McCoy. We have Sheriff Frank Philipps crossing the West Virginia border from Kentucky to arrest 9 men for the murders and several others for resisting arrest. And now this is all heading to the Supreme Court of the United States of America.

There was a question as to the legality of this action. The Governors of the states of Kentucky and West Virginia have now sent troops to their borders from stopping other raids and trying to calm tensions.

The Tug River Valley is in an uproar. Nine men are sitting awaiting trial when Pliant Mahon files his suit against the state of Kentucky that will land on the desk of the Supreme Court. This lawsuit will affect how bounty hunters will operate the hunting of criminals when they cross over to other states for many years to come.

The District Court of the United States February 9, 1888

He further petitioned that during the month of December 1887, or January 1999 the said Plyant Mahon, while a resident and residing in the state of West Virginia, was in violation of her laws, the Constitution, and the laws of the United States. Also that Mahon was arrested without a warrant, or legal process by a body of armed men from Kentucky and by force and against his will was taken out of the state.

At the same time as these events, another petition was presented to the court by one John A. Sheppard, stating that his case was also like that of Plyant Mahon’s and that the governor’s facts were true. Subsequently, the name of Plyant Mahon was substituted for that of John A. Sheppard, and the proceedings on the petition were conducted in his name.

The Court then placed an order for the jailer, Abner Justice, of Pike County, Kentucky to bring the person of Plyant Mahon to the District Court fo the United States in Louisville, Kentucky on the 20th of that month, and there to abide until a decision was made in the case.

The Pike County Jailer’s response was that Mahon was being held in the Pike County jail under the obedience of three arrest warrants issued by the clerk of the criminal court of the county. Under these warrants, Mahon was being held for the crime of willful murder that had been alleged to have been committed in that county, a crime for which the court had full jurisdiction.

Justice Testifies as to the Arrests

Abner Justice further replied that the three indictments against Mahon and others for the willful murder were found by the Grand Jury of Pike County, Kentucky, stating that the Grand Jury had jurisdiction over the case at that time. Believing these statements by the Grand Jury to be authentic and true, it was certified by the Governor of Kentucky and the said Govenor appointed Frank Philipps as the agent of the state to receive and bring to the state Mr. Mahon as provided by law in such cases. On or about January 12, 1888, Frank Phillips and others, with force and arms, did violently seize upon and capture Mahon and did bring him against his will to face charges in the state of Kentucky.

No Arrest Warrant Was Delivered

In his statement, Justice went on to further reply that no arrest warrant was issued against Mahon by the Governor of the State of West Virginia in compliance with the said requisition. That on January 30, 1888, replied to the Governor of state of Kentucky that after an investigation of the facts, and being fully satisfied in the case, that he could not find guilt in Mahon for the crime in which he was being charged.

On March 3, 1888, the court denied the motion for the release of Mahon, and the Marshal was then ordered to return Mahon to the custody of the Jailer, Abner Justice awaiting further court actions.

The state of Kentucky argued that the prisoner in custody, should remain so until trial and that was under no obligation to release them to the state of West Virginia or any other entity, regardless as to how they were arrested and retained.

Mahon’s attorneys argued that the Governor of the State of West Virginia was considering an application from the Governor of the State of Kentucky as a fugitive from justice when he was forcibly abducted by Philipps. Mayhon’s attorneys also made the argument that he was then seized by the Kentucky state authorities under legal process and was not entitled to be discharged from custody under a writ of habeas corpus from the circuit court of the United States.

The Supreme Court of the United States of America ruled 7-2 in favor of Kentucky. The Supreme Court issued no finding or opinion on the question of the legality of the arrest of the group of men. However, they did agree with the state of Kentucky that at that time, no law existed which prohibited the trial of the men for murder to continue. The trial could carry on regardless of how they were arrested and brought into the state.

The Rulings of the Dissenting Judges

The two dissenting Judges, Mr. Justice Harlan, and Mr. Justice Bradley. Both agreed that the writ of habeas corpus was properly issued and the prisoner, Mahon, should have been discharged and released from custody. That he was being held against his will and this was contrary to the Constitution and the Laws of the United States.

It was felt that states could take justice into their own hands and demand each other reparations for the illegal invasions of their states if this ruling was allowed to stand. That also that the parties who are injured legally or otherwise could resort to reprisals or other measures that they might deem necessary in order to obtain justice.

Not All Who Were Accused Were Arrested

It is interesting that Anse Hatfield was not among those that were arrested and tried. Neither Kentucky nor West Virginia sought for his arrest in any of the events that took place even though his location was well known and a bounty of $500 was placed upon his person at one point during the feud. Anse Hatfield was never charged with the murders of the three McCoy Brothers or for the shooting of two young McCoy children or the beatings, kidnappings, or other things that were done.

Even though he was also known to use the courts to his advantage when it came to matters between the two clans of the feud, when the main trial was over, Hatfield was not on the “run” after that point in history. Many have pointed out that it may have been Hatfield’s political connections that kept him from being arrested, however, his brother, Wall, had similar connections and was thus arrested, tried, convicted, and sent to prison.

The Bloody Feud of the Hatfields and McCoys
https://www.legendsofamerica.com/hatfields-mccoys/