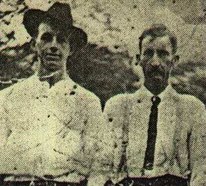 The events would lead to the men going on the run. Two men would run to West Virginia, one man would attempt to run to Florida, and one man would flee to parts unknown.

As we have already stated in The Killing Rock: The Oft Told Tale part 2, there was a failed arrest attempt made. The events of July 17, 1892 would lead to the men going on the run for what they presume is for their very lives. Two men would run to West Virginia, one man would attempt to run to Florida, and one man would flee to parts unknown.

Cal and Samuel Henan Fleming, along with Doctor Marshall Benton Taylor, and possibly Henry Clay Adams were at the Cleft of the Mountain. The men were there awaiting for a response to the three letters that were sent to the Sheriff to escort them to Wise County to give evidence to the events.

R.D. McFall would ask the Sheriff to become deputized to go retrieve the men. It was agreed upon and 20 men went with McFall to the Cleft of the Mountain. It did not go well as a shoot out occurred. It was not until after the shoot out that the Sheriff would learn that McFall and Taylor were actually enemies.

R. D. McFall and Booker Mullins would both testify that Booker had slipped in the mud and his weapon discharged. Both testified that Doc Taylor and the Flemings only began shooting at them after Booker’s rifle discharged… Both had tried unsuccessfully to express that Taylor and the Fleming’s opening fire upon the posse was in some way a surprise to them. Both received a scathing reprimand from the judge.

Scattered to the Four Winds

The four men fearing for their lives would go into three different directions trying to escape from what they thought was a murder attempt. Only Henry Clay Adams would never be found until he was acquitted in 1901 after he had already posted bail after he had turned himself in on June 1892.

It has never been stated in any of the stories where Henry went during his time on the run. There are some theories that he went to Missouri, but no evidence has been found if that is where he actually went.

Doc Taylor would hide in his attic for several days. His son, Sylvan helped him to escape the area. Taylor was found and arrested and brought back to Wise County, Virginia to face trial. For the story on how that happened please refer to Killing Rock: The Oft Told Tales Part 3 The Arrest of Taylor.

The following is the summarized story as given by E.J. (Doc) Swindall. The story can be found at A Narrative History of Wise County, Virginia by Charles A. Johnson.

The Fleming Brothers decided to make their escape to West Virginia. There was a reward posted for their capture and arrest and it is deputed as to the amount that the reward was set for. John Branham, Ed Hall, and E.J. (Doc) Swindall were deputized to go capture the fugitives.

There were letters that were intercepted from the Fleming brothers as to their hiding location. Through these letters it was determined the location of the Post Office and had their address and assumed names.

The men boarded a train in Norton, Virginia and traveled to Bluefield, West Virginia. It is reported that the deputized men traveled for seven days on foot in January weather to find the men.

On January 14, 1894, after staying all night in Boggs, West Virginia, one of the men was confronted by the Fleming Brothers as they were staking out the Post Office. Posing as a taxman, the confrontation did not get violent. The man was able to go back and get help as the Fleming Brother’s went on to conduct their business at the store and Post Office.

As the Fleming Brothers then left the Post Office, and went into their house and closed the door. The Deputized men then got their guns and went to the house. As they demanded surrender, the Fleming brothers grabbed their guns. The two sides began to fire upon each other.

There were thirteen men that had been hiding out in the house. They began to scatter and several of them were shot in the confusion.

Cal was shot to death by Big Ed Hall. Big Ed Hall and “Doc” Swindall were both wounded during the shoot out. It was thought that Doc would not survive as he was shot through the neck and jaw, but he did recover from his injuries. John H. Branham would die of his injuries nine days later.

Because of his death, the case against Preston McCalvin Fleming was ended. McCalvin would die on January 14, 1894 at only the age of 25 years old Cal would be buried a the Boggs Cemetery in Boggs, Webster County, West Virginia.

John Branham had fell on his back during the shooting. When Henan had aimed his gun to shoot John. There is confusion as to which man shot Henan John Branham or Ed Hall.

The shot, according to Doc Swindall, hit the cylinder of the gun and split in half. One half of the shot went into the pistol and the other half striking Henan. The shot split Henan’s arm up to the elbow and hand. Henan was then taken into custody. Henan was refused medical treatment until he confessed to the murders that had taken place in Pound Gap, Virginia.

According to the story found in Charles Johnson’s book; Henan had went to trial. On July 24, 1895 there was a six day trial in which a jury returned a verdict of not guilty against Henan. This was because the only witness to the crime, Jane Mullins, had died and the forced confession was denied as evidence.

There are conflicting stories upon this. There was no trial but in the preliminaries of the trial as it is also told that Henan’s confession was thrown out of court because it was made under duress. His medical treatment was withdrawn from him until he made a full confession. This action taken by the Deputies was deemed illegal. As well as Jane Mullins had died before the trial. So the prosecuting attorney dropped the charges against Henan.