During the re-sentencing Doc Taylor's lawyers tried to have him declared insane, however Judge Morison noticed Taylor giving advice to his attorney

During the re-sentencing trial Doc Taylor’s lawyers tried to have him declared insane, however during the hearing, Judge Morison noticed Taylor giving advice to his attorney as to how to question the witnesses. The Judge declared that anyone capable of advising his attorney was not insane. The court clerk, Charles A Johnson asked Doctor Taylor, if he had or knew of anything why the court should not proceed with the sentencing… .Taylor then replied “I have not, but a friend, a witness will speak for me”.

Judge Morrison then asked, “who is your witness”. to which the prisoner replied “The Lord Jesus Christ, will you hear him?” the Judge then replied, “I will”.

Taylor produced a small Bible from his pocket, and began to read from the book of Psalms. The passages he read dealt with false witness, and oppression after a few chapters, Judge Morrison stopped him and stated, “Doctor Taylor, I fear you have invoked the name of Jesus Christ for a selfish and improper purpose…”. After a few minutes of speech by the Judge, sentence was passed that Doctor Marshall Benton Taylor would be hung on October 27th 1893, between the hours of 10am and 4pm on the public gallows in the Wise courthouse square.

As the day of his execution approached… several peculiarities arose, and were widely rumored, drawing large crowds to the Courthouse square for the execution.

The first of which, being that the man who was widely known for appearing all in black from head to toe, would on this day be dressed all in white. The second, was that he would preach his own Funeral, and lastly that he would arise in three days.

According to John Fox Jr’s account, in the Trail of the Lonesome Pine, the “Red Fox” would spend his last days on earth in an unusual way as well. 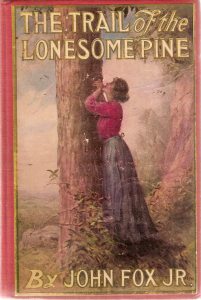 “The Red Fox preached his own funeral sermon on a Sunday, before the day set for execution and a curious crowd gathered to hear him. He was led from the jail, and stood on the jailer’s porch with a little table in front of him; on it lay a Bible. On the other side of the table sat his wife, a little pale faced old woman in black, with a black sunbonnet drawn close to her face. By the side of the Bible lay a few pieces of bread. It was the Fox’s last communion – a communion which he administered to himself, and in which, there was no other soul on earth to join him, except, the little old woman in black.

It was pathetic beyond words when the old fellow lifted the bread, and asked the crowd to come forward to partake with him in the last sacrament. Not a soul moved, only the little old woman who had been ill-treated, and deserted by the old fellow for many years; only she, of all the crowd gave any answer, and she turned her face for an instant timidly toward him. With a churlish gesture, the old man pushed the bread over toward her, and with hesitating, trembling fingers she reached for it.

The sermon that followed was rambling, denunciatory and unforgiving. Never did he admit guilt.

On the last day the Red Fox appeared in his white suit. The little old woman in black had even made the cap, which was to be drawn over his face at the last moment – and she had made that white too. He walked firmly to the scaffold steps, and stood there for one moment blinking in the sunlight, his head just visible above the rude box.”

John Fox Jr was a guard working at the Gladeville, or Wise Va Jail. His work is based upon several people of the mountains of Virginia and Kentucky. Although the work is what is now called “Faction” a blending of Fact, and Fiction like any story based on truth, it contains hints and clues, that if followed can lead to a wealth of knowledge.

However, for a detail of that last day, we turn to the words of another author, that of Charles A. Johnson, in his book. “A Narrative History of Wise County, Virginia.”

“At 2 o’clock he was brought into the enclosure that surrounded his scaffold. The condemned man was attired in snow white linen, from neck to foot, and wore a brown derby hat and neat slippers. While one of the guards spread newspapers on the gallows steps, and platform so that not a speck of dirt might touch his shoes, he stepped to one side of the scaffold, and viewed it from top to bottom. He then stepped firmly up the steps, and on to the trap door. He then bowed on one knee, opened his Bible, and reading in a very low tone, a few passages of scripture.

He arose without assistance, and stood firm, while the noose was adjusted by the jailor, Charles L. Huges. His hands were tied with a white handkerchief, and a white cap, instead of a black one, was pulled over his face. Thus far he never faltered, but when the guards removed the props from under the trapdoor, they jostled it a little, and the old man fell in a heap on the platform, an awful aspect to witness. He had to be assisted to his feet, and stood tottering there for an instant, for the hatchet in the hands of Deputy Sheriff, Jeff Hunsucker, wielded its stroke, and the trap door swung from under him, the body of “Doc” Taylor, the “red fox,” hung between heaven, and earth, and his spirit went to another world than ours.

The body turned rapidly around, and around until the rope fastened around his neck became tightly twisted, then the body reversed it revolutions, until the rope became untwisted, and again repeated its revolutions in the same way, the body hung perfectly still – not a muscle moving. At the end of 19 minutes, he was pronounced dead by Doctor HM Miles and Doctor TM Cherry, and the body was then cut down, and delivered to his family.”
The body was placed into a casket inside the gallows house and then was taken out by his family and the men who had witnessed the hanging from inside the booth. As requested the casket was kept at the family home for three days when Doctor Marshall Benton Taylor did not raise from the dead his body was buried without ceremony, in the Gladeville cemetery on the hill, over-looking his home. His grave remains unmarked.