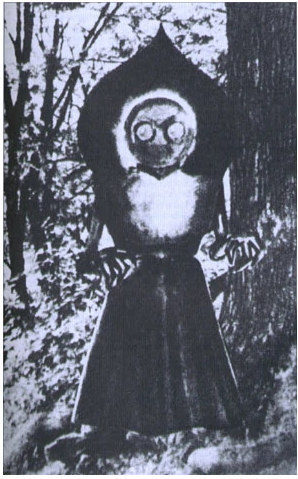 The Flatwoods monster is a tale of an extraterrestrial encounter in Braxton County, West Virginia.

The Flatwoods monster is a tale of an extraterrestrial encounter in Braxton County, West Virginia. Brothers Edward and Freddie May, with their friends Neil Nunley, Ronnie Shaver, and Tommy Hyer from the Flatwoods Elementary School would meet against something that they would never forget. What really happened that fateful day in September of 1952?

Why were there other sightings of the creatures that did not seem to get the same attention as the Braxton County encounter? Was there something in the woods that fateful week in 1952? Did a UFO crash and help for the creature was finally answered? Come with us as we grab our flashlights and roam the woods to have our own meeting with the Flatwoods Monster.

On September 12, 1952, at 7:15 p.m., a bright light shot across the sky capturing the attention of the five young boys as they were playing in the elementary school yard. They stopped to tell Edward and Freddy May’s mother, Kathleen where they were going. Ms. May asked National Guardsman Eugene Lemon to join the children and herself to keep them safe as they went off to explore and investigate what the light source was.

The light landed on the property of farmer G. Bailey Fisher. The group walked across the property and up a hill where they discovered a pulsing red light. Lemon shined his light toward the flashing red light and stopped in shock. That is when they saw the outer-worldly being staring back at them.

As soon as the creature started moving toward the small group, Lemon dropped his flashlight and the group scattered. They ran as fast as they could away from the site. Upon reaching the May home, Lemon and Mrs. May called the local authorities to report what they had seen. They were all shocked and horrified to learn that the police had been looking for a UFO crash site and went to the location.

The alien that is described is not your typical gray alien type. This creature stood about ten feet tall. From there the descriptions were a little different but described basically the same creature.

The body is described as being covered in dark robes and also described as a “metal dress” in the appearance of either black or dark green in color that has large folds. The creature has twisted, small, claw-like hands.

The alien then seems to glide or hover toward the group while making a hissing sound. There was a pungent odor in the air that made several of the group nauseated. For several days afterward, several from the group would experience throat irritation, vomiting, and nausea.

A couple of days before the group sighting, Mrs. Harper also claims to have seen an identical creature roaming the woods in the town of Heaters, West Virginia. Heaters is just five miles north of the location of Flatwoods. Here is how the encounter went…

Mrs. Harper and a friend were walking to the store. The road that was just off of her property had been washed out by rains and had deep ruts and gullies that made it hard to travel. So the pair took down a path in the woods to cut their travel time and distance.

Walking approximately half of a mile through the wooded area, Harper noticed a ball of light that looked like a fireball on one of the hillsides. Thinking that the local hunters were after a fox she didn’t think anything of it and continued walking down toward the store.

Along their journey, Harper looked back in the direction of where the fireball had been. And instead of a ball of light, there stood a ten-foot-tall creature matching the description of the group of people who would witness it several days later. Harper and her friend would run through the woods escaping using rocks and boulders that were laying around the hillside.

On September 13, 1952, the next day after the Flatwoods occurrence, the creature was once again seen near Strange Creek, West Virginia. Strange Creek is located twenty miles south of Flatwoods.

George and Edith Snitowsky and their 18-month-old son were driving along route 4 between Braxton and Clay Counties when their car suddenly stopped and the engine cut off. Mr. Snitowsky tried to restart his car but it would not start.

The road was dark and lonely and the baby started to cry. The Snitowskies were trying to figure out what they should do next when all of a sudden there was a strange pungent smell in the air. When the couple turned to face forward they saw a bright light and standing before them was the same ten-foot-high creature hovering in front of them.

The creature had apparently taken off the robes and hood and before them stood a reptilian, bony alien. The creature had lizard-like hands which it dragged across the hood of the car before turning and disappearing into the woods. As soon as the creature had disappeared, the car restarted and the couple sped off into the night.

When the local police arrived at each of the sites, there was no evidence of the creature nor of its craft. The pungent smell had also gone away from the area. The West Virginia State Police laughed off the reports as hysteria and did not investigate the area.

Representatives for the U.S. Air Force came to investigate the area and found no evidence of the sighting. While they have closed the Braxton County file, they are now conceding that there are stories that defy explanation.

There is an account from the Braxton Democrat by author Lee Stewart Jr., that skid marks were present in the field from the Flatwoods encounter. UFO enthusiast claim that this is evidence of a UFO crash or hard landing.

There are skeptics out there, including the U.S. Air Force that claim that the light in the sky was a falling meteor, the description of the creatures resembled a barn owl, and the flashing lights were from emergency beacon lights from an aircraft. The combination of these things together along with a heightened awareness of the surroundings, along with fear, hysteria, and anxiety was a mixture to see something that was not there.

The two properties that the craft was said to have landed on are now private property. Please respect the privacy of the owners when visiting the Flatwoods, West Virginia area. There are five large chairs that are painted in honor of the Flatwoods Monster. There is also a store and a museum that is available to tourists for more information.

While not one of the most well-documented cases of UFO sightings in the Appalachian Mountains, it is one event that took place in three locations at three different times within days of each other. It is now a very well-celebrated tourist destination for West Virginia.

The question becomes, what happened during the second week of September 1952 that caused everyone to see and experience the same encounters with the creature? Was it the same creature? Was it calling for help from the local residents? Did it take off the hood from its body to make it look more friendly? Did it realize that it was frightening the local residents and therefore left and was never seen again?

We leave it up to you our viewer and reader to decide upon the intention of the Flatwoods Monster. All we can say is that many legends and myths of the Appalachian people are handed down generation after generation and are held close and dear to the people of the mountains. And for three groups of people, the legend became very real to them.

We at Kentucky Tennessee Living want to thank you for watching our series on The Appalachia Weird Cases. Don’t forget to hit that like button as the more likes we receive the more likely YouTube is to suggest our videos to other viewers. Also, to receive notice when we upload a new video be sure to subscribe and click the bell notification.

In 1952, the Flatwoods Monster Terrified 6 Kids, a Mom, a Dog—and the Nation
Roy Wenzl
https://www.history.com/news/flatwoods-monster-west-virginia