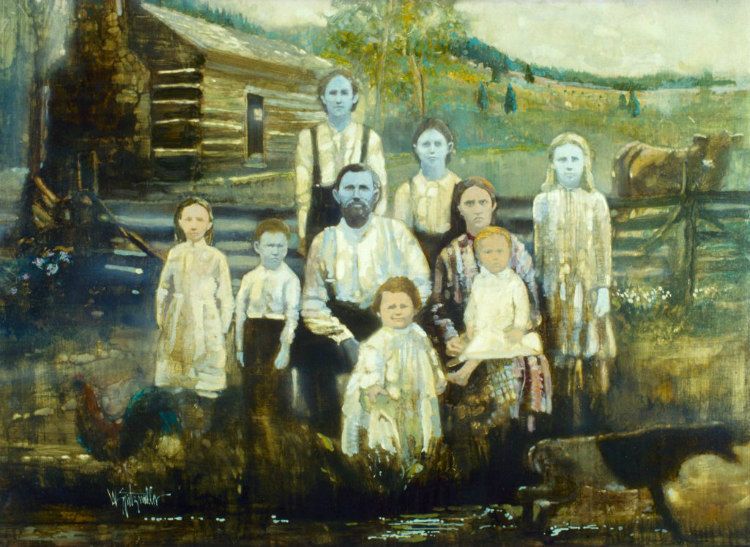 The Fugate Family stands out as being the most unusual case in Appalachian history.

What do the Whitaker family of West Virginia, The DuPont family of America, the House of Habsburg of Austria, and the Fugate family of Troublesome Creek, Kentucky have in common? They are all victims of the diseases and genetic issues that come with inbreeding. While these cases are now solved as to what happened to each case, the Fugate Family stands out as being the most unusual.

Inbreeding is strongly discouraged by laws and is a taboo subject. And frankly, most people from the Appalachian Mountains hate that stereotype that somehow got attached to them. The majority of Appalachian Americans do not come from an inbred family. And with respect, the Fugate family has long since stopped the practice. However, to understand how the Fugate family stood out among the people of the Appalachian Mountains we must discuss the unusual circumstances that led to this case.

Having said that. This is retold with the utmost respect and love to the Fugate family.

In 1820, Martin Fugate and Elizabeth Smith married and settled in Troublesome Creek, Kentucky. This is a part of the Appalachians that is close to the City of Hazard. It is an area that sits near the Perry County/Knot/Breathitt County lines.

Some sources state that Martin Fugate was blue himself and others state that he was not. Together, Martin and Elizabeth would have seven children. Four children were born with blue skin. However, many sources state that this was highly surprising to the Appalachian couple. Neither Martin nor Elizabeth experienced any symptoms that were associated with the genetic disorder.

Why Did The Fugate Family Start Turning Blue?

Rural Eastern Kentucky in the 1800s and early 1900s was sparsely populated. Many of the hollers had only family members living in them. Sometimes the next family over could be miles away from your home.

Also, in many hollers in the area, the creek beds were often the roads to the houses. Add to this that roads were not constructed in the area until 1910. Many people lived in isolation and preferred to live their life that way. For 150 years, the Fugate family chose to live their lives isolated from everyone else in the county.

However, as a direct result of this isolation, the family members had very few other choices but to marry their relatives. The Smith, Combs, Richies, and Stacy families did marry into the family from time to time. But there are many in the Fugate family that did marry their close relatives.

The “Bluer” the Fugate family got the more that people shunned them as potential marriage partners. Many people felt that the family was strange or touched and had very little to do with them. Others saw it as a racial issue. They feared that they would also have blue children and did not want that to happen.

None of the Fugates seemed to show any symptoms other than blue skin. However, the symptoms of Met-H or methemoglobinemia can include the range from no symptoms to severe symptoms. Some of those symptoms include developmental delays, headaches, dizziness, nausea, poor muscle coordination, shortness of breath, seizures, heart arrhythmias, and finally blue skin. And in severe cases can cause coma or death.

Dr. Madison Cawin III, a hematologist for the University of Kentucky Lexington Medical Clinic, had heard rumors of the strange blue people that were in Troublesome Creek. Cawin met with Ruth Pendergrass, who was a nurse working for the Health Department who had treated the Fugate family and knew them.

In the 1960s two members of the Fugate family sought help to find a cure for their blue skin so that they could fit into the general population. Rachel and Patrick Ritchie sought out Dr. Cawin when they heard he was trying to find a cure.

After speaking to the family, Cawin injected methylene blue, which is a blue dye. This worked almost immediately with astounding results. Even though the effects were temporary, the family was prescribed methylene blue tablets and this helped to maintain the lasting effects of the injections.

Dr. Madison Cawin III passed away in 1985. However, his research including family charts and blood samples has helped in tracing down recessive genes.

Once the family realized that inbreeding was the cause of the disorder, they began to look outside of their family for spouses. Many of the Fugate family relocated to different areas and began looking outside of the family to marry. It took several generations but today the disorder has once again become a recessive gene.

Benjamin “Benjy” Stacy was the last child born to a family known to have blue skin in 1975. This alarmed the doctors who were not aware of the genetic predisposition for blue skin. After speaking to the grandmother of the child, the doctor determined it was a genetic disorder that turned the child’s skin purple. After a few weeks after his birth, the child’s bluish skin faded.

Refusal to Speak to Media

Several major news organizations as well as the Oprah Winfrey show ran stories concerning blue-skinned people. The Fugates have refused to make a public statement concerning the family’s history or their genetic abnormality.

However, there are several documents, news stories, shows, and other media that cover the topic.

We at Kentucky Tennessee Living want to thank you for watching and reading our articles. Don’t forget to hit that like button as the more likes we receive the more likely YouTube is to suggest our videos to other viewers. Also, to receive notice when we upload a new video be sure to subscribe and click the bell notification.

The Fugates, A Kentucky Family with Blue Skin!
by Bipin Dimri
https://www.historicmysteries.com/the-blue-fugates/

People of The Appalachians
https://worldhistory.us/american-history/people-of-the-appalachians.php

The True Story of the Blue People of Kentucky
https://health.howstuffworks.com/human-body/systems/circulatory/blue-people-kentucky.htm

The Blue People of Appalachia
https://thesouthernvoice.com/the-blue-people-of-appalachia/

The Mystery of the Appalachian Blue People: The Blue Fugates
By Hollis Oliver McLain III
https://smokymountainsource.com/mystery-of-appalachian-blue-people/