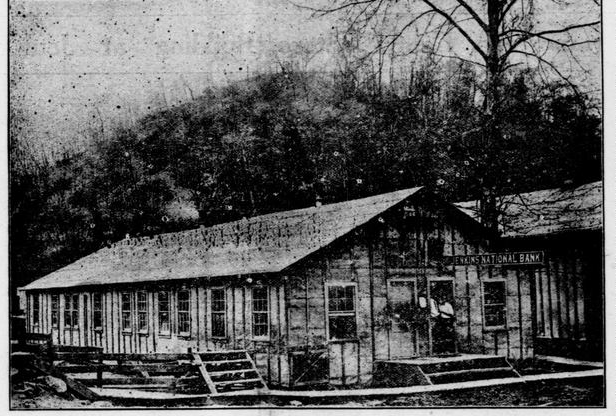 New Bank in the Coal Country Installed in 1911

This article is a re-written version of the half-page article that appeared in the Mountain Eagle in June of 1912.   None of this is a direct quote and it is completely my own words.  Letcher County is Coal Country. At the time, there were very few banking systems in place in the USA.

The Jenkins National Bank was one of the first banks to be in existence in Letcher County. The reason we believe it was the first bank is that Consolidated Coal Company built Jenkins to be its flagship city. This would be the place that the corporation would set up its main operations. Several others would be set up to do business for the people of Letcher County and the coal mines.

The Granting of the Charter and the Name Change

The U.S. Government granted a charter for the Jenkins National Bank on August 4, 1911, with a capital stock of $50,000.00. Four days later the bank opened for business. The first bank’s location was in the Consolidation Coal Company office building. For the first day of business, the amount of $20,000 was received for the day’s deposits. Within the first year, the deposits steadily increased to over $200,000.00.

In January 1912, the name of the bank was changed from Jenkins National Bank to First National Bank of Jenkins since it was the first bank in Jenkins. This decision was approved by the U.S. Government within just a few days and began operating under its new title.

The bank will be moved during the month of September 1912 to a new building. The bank acquired a fire and burglar-proof time lock for the Mosler Safe and a fireproof vault. There were also safety deposit boxes installed for the customers’ use who wished to protect their valuables or important papers against loss due to fire or theft. There would also be a new steel door with modern steel filing devices installed on the vault.

The new building will be constructed with brick and stone making it as fireproof as possible. Having all of the modern banking facilities available to the customers with the lobby being very spacious. The new equipment will also be added to the building such as adding machines, the latest filing devices, an automatic changer, the latest in fire and burglar-proof safety measures.

Why These Chosen Men?

Col. John Clarence Calhoun Mayo is known as one of the most progressive businessmen and financiers in the Central part of the United States of 1912. Many of the local areas knew Col. Mayo by way of business dealings. Mayo worked for the interest of the coal mines and bought the mineral rights from the landowners of the area for twenty years before 1911.

John G. Smyth also worked as the manager of the Elkhorn Division of the Consolidation Coal Company.

George T. Watson was also the Vice President of the Consolidation Coal Company of Baltimore, Maryland at that time.

John E. Buckingham was well-known in the banking circles of Eastern Kentucky.  He was associated with the Paintsville, Kentucky, National Bank of Paintsville since its organization in 1900.

W.H. Potter was well connected with the First National Bank of Pikeville located in Pikeville, Kentucky, and the Union Bank of Whitesburg in Whitesburg, Kentucky.  His affiliation with these two banks is not listed or known at the time of the writing of this article.

W.S. Perry will be under the direct supervision of the Board of Directors and hold the position of manager.  Mr. Perry has been working in the banking business since his early youth.

O.U. Terrill is an expert accountant who has had very wide experience in bank accounting.  It is not known if he has another position within the company in 1912.

Conditions of Being a National Bank in 1912

Being part of the national banking system, the First National Bank of Jenkins is subject to the supervision of the U.S. Government inspections twice a year by the National Bank Examiner. This inspection includes checking the books, counting the cash on the premises, checking their accounts to make sure they are correct, and making a thorough examination of all of the financial conditions of the bank. The bank is also required five times a year to make a report to the U.S. Government that reflects the condition of the bank. The U.S. Government determines when these reports are due.

For More Information on the First Bank of Jenkins, Kentucky