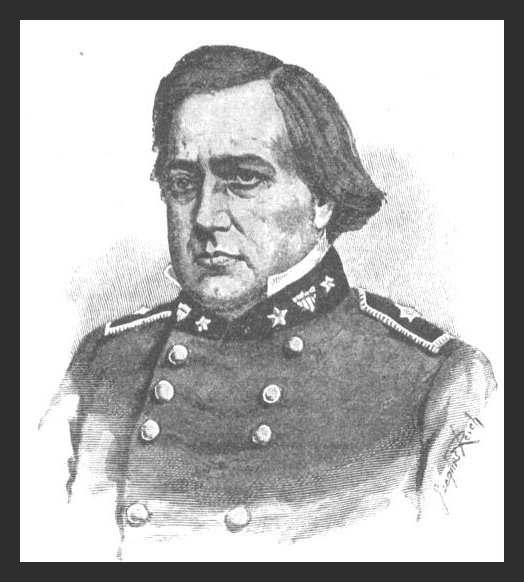 General Humphrey Marshall was a General for the Confederate Army. While he was not happy with his post, it was one of the most significant of the Civil War.

Here at Kentucky Tennessee Living, we strive to keep this site nonpolitical in nature. All historic events posted that changed the lives of future generations and have helped to give miners a voice in their working and living conditions. As well as we remember those who fought on both sides of the Civil War. All events posted are for the benefit of remembering who we are as the American Appalachian people.

Who was General Humphrey Marshall?

Humphrey was first cousins to William and David Birney who were both served as generals on the Union side of the War. Their father James G. Birney, Humphrey’s uncle was a well known abolitionist. He had another cousin that served as the Lieutenant Governor of Michigan, and later Minister to the Netherlands whose name was James M. Birney.

His grandfather’s name was also Humphrey served as a United States Senator from the state of Kentucky. The older Humphrey was the first cousin to Chief Justice John Marshall.

Humphrey the younger was a 1832 West Point graduate from the United States Military Academy in New York. He would graduate as the 42nd in his graduating class. He served as Brevet 2nd Lieutenant with the mounted rangers and dragoons. Marshall would fight in the Black Hawk War during this time. After this conflict in April of 1833, Marshall resigned from the Army to study law.

In 1833, the State of Kentucky admitted Marshall into the bar and he practiced law in Frankfort, Kentucky. Two years later in 1835, Marshall would move to Louisville, Kentucky.

Kentucky Militia and the Mexican-American War

In 1836, Humphrey Marshall joined a militia and became a captain. During this time Marshall and a company of volunteers marched to defend Texas and the frontier against the Native Americans. His force disbanded however when General Sam Houston had a victory at San Jacinta.

By 1838, Marshall was a major. In 1841, he became a lieutenant colonel. In 1846, Marshall became a colonel of the 1st Kentucky Cavalry during the Mexican-American War. He fought in the Battle of Buenos Vista with Zachary Taylor’s Army of Occupation.

Marshall returned home after the Mexican-American War and became a farmer in Henry County, Kentucky On March 4, 1849, Marshall was elected from the Kentucky’s 7th District as a Whig to the 31st and 32nd Congresses. During his time in the Congress, he supported Henry Clay’s Compromise of 1850. He resigned from his Congress position on August 4, 1852.

From 1852-1854 Marshall was appointed as the United States diplomatic commissioner to China. When this term was over, he returned to the state of Kentucky where he was again elected to the 34th and 35th Congresses. Even though he was renominated for a fifth term in office, he turned the offer down and refused to run.

In 1856, he became a member of the American Political Party of New York City. And he was instrumental in removing all secrecy in the political organization.

Marshall was known for being moderate in his political views. He supported John C. Breckenridge for President in 1860. He also advocated and worked for the state of Kentucky to remain neutral. This effort failed when Union Troops occupied the state of Kentucky. Marshall felt that this was coercion.

Enlisting with the rank of brigadier general, Marshall joined the confederacy and aided in recruitment. He was stationed in West Virginia but saw very little combat.

Pound Gap and The Battle of Middle Creek

In January 1862, General Humphrey Marshall and his troops were stationed in Paintsville, Kentucky. There he would be confronted in battle by General and future President James A. Garfield. The fighting did not go well as Garfield’s Federal cavalry chased off the cavalry from Marshall’s troops to the forks of Middle Creek, two miles from Prestonsburg, Kentucky. On January 9th, the two armies met again and Marshall again withdrew his troops after a day of fighting.

General Humphrey Marshall had his troops vacate their trenches at Hager Hill and marched his four regiments up the Prestonsburg Road to the mouth of Abbot Creek which intersected with the Pound Gap road at that point. Marshall used this point to station his troops.

Because Garfield was pursuing him from Paintsville, Marshall had received intelligence that Cranor’s 40th Ohio was moving east from Licking Station to reinforce Garfield. He was in a perfect position to intercept either of these forces before they had the chance to combine against him.

This area also afforded Marshall a route out of the area if he won or lost the battle and had to do a hasty retreat. As it turned out, it was a retreat. He retreated his forces through modern-day Goodloe and Pyramid, over Brushy Mountain, and down Brush Creek to Hueysville. He then established a new camp at the Joseph Gearheart Farm for a week. According to tradition one unnamed Confederate Soldier died and was buried at the Gearheart Cemetery. While other soldiers burned fence posts to keep warm. Marshall then moved his troops to the Johnny Martin farm for rest and a warm welcome.

Marshall was able to obtain a victory at the Princeton Court House battle. This would be a minor battle in the war and was fought on May 15-17, 1862 in Mercer County, Virginia. The battle would see the win for Marshall against brigadier general Jacob Dolson Cox, who was trying to threaten the East Tennessee and Virginia railroads.

Even though Marshall had a victory in this battle, he became frustrated because he was not allowed to have a bigger assignment in the war. In June 1862, Marshall briefly handed over his resignation.

In the fall of 1862, Marshall returned to battle and was part of the Braxton Bragg’s Kentucky operations. After a short time in June 1863, Marshall then resigned his commission again and moved to Richmond, Virginia where he practiced law.

Second Confederate Congress and Collapse of the Confederacy

When the Civil War was finally over, Marshall moved to New Orleans, Louisiana. While there, President Andrew Jackson restored Marshall to a citizen of the United States in December 1867.

Marshall then returned to Louisville, Kentucky and began to practice law again. There he would stay until his death on March 28, 1872. He would be buried at a Frankfort Cemetery in Franklin County, Kentucky.