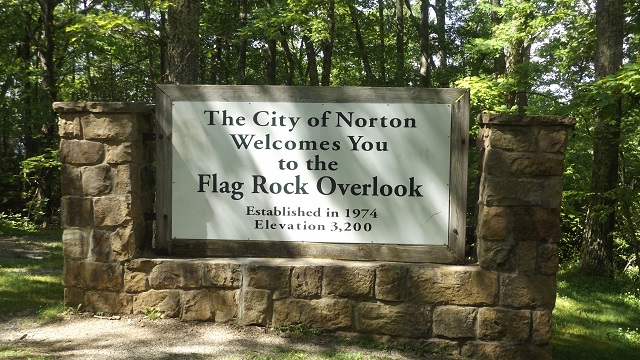 On the lower slopes of Stony Mountain you can find two very interesting attractions. One is the High Knob Observatory and the other is the Flag Rock. As you travel the steep winding road that was once a wagon road that connects Norton to Dungannon, Virginia, you will find an open gate to the Flag Rock Recreational Area. At an elevation of 1,000 feet above the City’s elevation of 2,350 ft. Flag Rock gives panoramic views of the City of Norton and the surrounding areas.

“Flag Rock” came from a German immigrant Karl Matuszczyk who planted an American Flag on this large outcropping rock in the 1920s. Flag Rock was dedicated in 1974 and opened on June 12, 1976.

Be sure to say hi to the newest resident of the Flag area park, the statute of Big Foot. The statue was erected because sightings of the legendary animal have been recorded in the park. The locals call the statue “Woodbooger”. Because the show Animal Planet’s Finding Bigfoot which filmed part of an episode on Flag Rock in 2011, the area has now been deemed a “Woodbooger Sanctuary”.

Also found in the park is another rare animal called the green salamander. Like its counterpart the “Woodbooger”, it is rarely seen and sensitive to disturbances in the environment. What makes this salamander very unique is that it is known to climb to the top of the tree canopy where it blends in to the leaves and lichen on the trees. Both animals can be photographed but in no other way disturbed.

Development of the Park

The park sits within a thousand acres with over 25 acres developed to explore the area is a great weekend getaway to visit.

Now a Recreational Park, camping, and picnic areas are available as well as rentals for shelters. Restrooms are available when the campgrounds are open depending on the weather.

There are two shelters that provide a large grill areas, fireplaces, electricity and water can be rented for $50 a day. There is a playground area and a recreational field between the shelters. There are five smaller shelters that are located around the park for no fees however they are a first come basis.

The Campground is an eighteen site campground that is open every year from the Spring through the fall. Dates for camping are available dependent on weather conditions. There are hot showers available, flush toilets, and a central water fountain when the campground is open. Please adhere to the park rules concerning camping.

The park also boasts two reservoirs. Both the Upper and Lower Reservoirs have state-stocked Trout. You must have a valid Virginia Fishing License to fish in the state. The Upper Reservoir is open to kayaking and canoeing and electric motor boating. It has a boat launch that is accessible off of State Route 619 just three tenths of a mile above the entrance to Flag Rock Recreation Area

As of November 2014, the Flag Rock area began development of climbing and bouldering routes. This is a memorandum signed between the City of Norton and Central Appalachia Climbers Coalition to continue to develop the park.

For more information on the High Knob Observatory
http://kytnliving.com/high-knob-observatory/