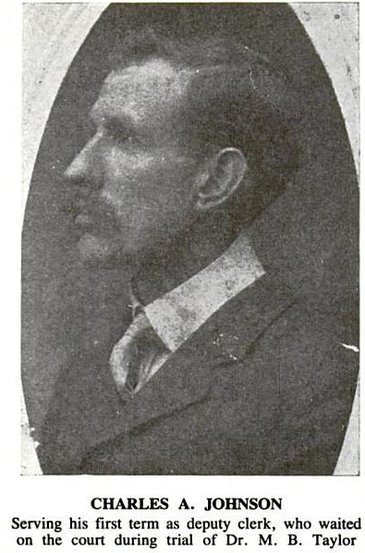 A Note on Charles A Johnson’s Book: Killing Rock the Trial Part 3

In his 1938 book “A Narrative History of Wise County, Virginia” Charles A Johnson asks these questions.

In his 1938 book “A Narrative History of Wise County, Virginia” Charles A Johnson asks these questions.

“Was the “Red Fox” proven guilty beyond all reasonable doubt of the crime of which he was charged? Was the verdict of the jury rendered against him a just verdict? Was the action of the Supreme Court of Appeals, in refusing the prisoner a new trial and affirming the judgment of the lower court, sound and beyond criticism?”

Mr. Johnson’s book was published 45 years after both the massacre and the trial. The book contains over 400 pages and covers a wide variety of topics. Chapter 32 is the last chapter in the book.

The chapter is dedicated to the Pound Gap Massacre and with 56 pages, it is by far the longest in the book. By the questions he asks and the statements he makes one can ascertain the importance this chapter held for the author.  Charles Johnson sums up the reason for the chapter in one long complex sentence.

He says, “There has been much conflict and diversity of opinion among the older class, that has been handed down to the young generation, as to just what the evidence really was on which the jury passed their verdict of guilt.”

His fears were justified. Over the last 130 years dozens of stories have arisen trying to explain why a well-respected Doctor, Preacher, and ex-lawman would ambush and kill the family of a man who had been a quadriplegic for well over a year.

In the “Introduction” of the book Mr. Johnson admits that he is not a historian. This fact plays out in his chapter about the massacre. Although Mr. Johnson does a good job in covering several events that happened around the massacre, he is nonlinear in his presentation.

He tends to jump around from topic to topic and subject to subject. What’s more he actually quotes several “wives’ tales” about the event. The easiest of these statements he could have debunked is the fact that Doc Taylor did not leave his Talt Hall guard duty to go and massacre the Mullins party.

In His coverage of the trial, Charles Johnson explains that the copy of the transcript he obtained was the transcript that was sent to the appellate court. He also tells us that other than the transcript and four affidavits everything else concerning the trial had been lost. This will become important in a later video.

Please Note— Part of this story, the questions asked of the witness are fictional. Because at the time of the Taylor trial, short-hand reporting had not come into popularity nor was court reporting efficiently done. In making a transcript of evidence, to be used in an appeal to the State Court of Appeals.

The Judge would write the appeal. The lawyers would write out the evidence or testimony given by each witness, in a narrative style. These transcripts were not done in the present-day question and answer style as only the answers given by the witness was recorded.

If the lawyer’s transcripts did not agree on a testimony given by the witness. The judge would then write the questions which caused the disputed evidence in the transcript of the trial. This is done only once in this transcript. But according to Mr. Johnson there were 12 exceptions that were supposed to be sent to the appellate court with the transcript. These exceptions, whatever they were, never made it to that court and have now been lost to time.

We at Kentucky Tennessee Living would like to thank you for watching our series on The Killing Rock. Don’t forget to hit that like button as the more likes we receive the more likely YouTube is to suggest our videos to other viewers. Also, to receive notice when we upload a new video be sure to subscribe and click the bell notification.