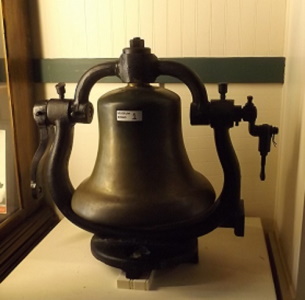 On July 13, 1900, the final IC accident report was released by the acting General Superintendent of IC, A.S. Sullivan.

John M. Newberry was the flagman on the southbound No. 83 that Jones hit, out that night to warn Jones. However, it is not clear if he did not see him because of the fog, the speed of the train, or he was too far from the tracks to see him clearly, or Jones had ignored that he was there. However, according to testimony given at a hearing, Newberry claimed he had gone out 3,000 feet (about twice the height of the Empire State Building) and placed warning torpedoes on the rail. He continued another 500 to 800 feet where he stood to signal Jones of impending danger.

According to the hearings official report: Web did hear the torpedo explode as they neared the Vaughan Station. He then walked out to the gangway on the engineer’s side of the train to see the flagman with the red and white lights beside of the tracks, to which he then looked out from his vantage point from the left side of the train because it was better. It was at this moment that Web saw the lights from the caboose and warned Jones of the train on the tracks.

However, the accident report does lay the blame of the accident upon Jones. For not heeding the warnings of a flagman. Until the day he died, Web continued to state that they had no time to stop the train as Newberry was not in the position that he claimed that he was in.

All these estimates come from the site (https://en.wikipedia.org/wiki/Casey_Jones)

Wm. Miller, Express Messenger, injuries to back and left side, slight bruising

It took about ten years for the imprint of the engine to leave the embankment where it stopped. The outline of the headlight, spokes of the wheels, and boiler could be seen very clearly. Handcars were used to for people who wanted to ride up to the scene to view the traces that were left. Because the corn was scattered everywhere, it grew for years in the surrounding fields around the wreck.

Engine No. 382 Back in Service

Engine 382 was brought to the Water Valley shop and rebuilt and put back into service. It ran the exact same run with a new engineer named Harry A. “Dad” Norton. Even though the engine was renumbered several times to 212, 5012, and 2012, death and misfortune seemed to follow it down the tracks. “Ole 382” was involved in several accidents that took six lives.

In January 1903, criminals caused the 382 to wreck causing Engineer Norton’s legs to be broken and he was severely scalded. His fireman died of his injuries 3 days later.

In the month of September 1905, the 382 turned over in a Memphis South Yards. Because it was moving at a very slow rate of speed, Engineer Norton was uninjuried in that accident.

January 22, 1912, the 382 was involved in an accident that killed five railroad men and injured several others. The Seminole Limited No. 3, which had the now numbered 2012 Engine, ran into the rear of the passenger train going 50-miles per hour. The 2012 was standing still taking on water when it was struck. Those that were killed were J. T. Harahan, Sr., former president of the Illinois Central, F. O. Melcher, vice president of the Rock Island, E. B. Pelice, general soliciter, Eldridge E. Wright, attorney, son of former Secretary of War Luke E. Wright of Memphis, Payne, engineer of No. 3, Champaign, Ill. The accident is called the Kinmundy Wreck as it happened near Kinmundy, Illinois. Engineer Strude was at the wheel.

The engine was finally retired July 1935 with no futher incidences reported.

We hope that you have enjoyed our little railroad trip through history as we have taken a close look at one of the American Legions of History.  Thank you for visiting our site.