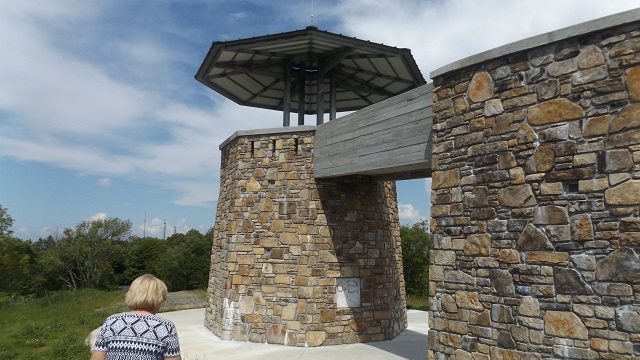 The first week of June 2016 I went to see the High Knob Observatory in Norton, Virginia with my mother, Katie Adams.   Located on the peak of Stone Mountain, at an elevation of 4,223 feet.  The steep winding road was originally a wagon road that connected Norton to Dungannon, Virginia.   The tower straddles the area that divides Scott and Wise Counties in Virginia.   It was originally built as a fire tower and is one of the few that are remaining in the Appalachian Mountains.

In the early morning hours of October 31, 2007, the tower fell victim to arson.   Through the consolidated effort of The High Knob Enhancement Corporation and the Norton Community’s love for the landmark, efforts began in 2009 to rebuild the area.   The area is now completed.  Artistically pleasing the new tower compliments the area.   The slopping path that leads to the area is easy to walk with minimal effort and is handicapped-accessible.

Be sure to bring your cameras as the view from the tower is breathtaking.   You are able to see Lee, Scott, and Wise Counties from the tower and the Cities of Norton and Wise Virginia.